At the entrance to the commune of Trois-Rivières, just past the hamlet of “Trou au Chien,” watch for a carved wooden panel next to the National Highway that says “Sentier de la Grande-Pointe“ (“Grand-Point Trail”). This marks the beginning of a path that winds along the scalloped shoreline, leading to the remains of an old military battery and powder magazine that are still in good condition. In the 18th century, the battery was used to monitor Les Saintes Channel. It communicated with Fort du Chameau by a system of flags and fire. It also defended the "Réduit," a refuge for the local population in case of attack. Two cannons testify to the risks confronted by these coastal defensive structures in this theater of battle for possession of the region’s agricultural riches between the 18th and early 19th centuries. Continuing on the path through underbrush, hikers arrive at the ruins of a former sugar plantation known as La Coulisse (featuring refinery and sugar mill buildings, etc.). The nearby Petit Carbet River is commonly known as “La Coulisse” due to its natural slides and pools once very popular with local residents. For more information:  Parc National de la Guadeloupe - rando.guadeloupe-parcnational.fr - Tel.: 0590 41 55 55 - www.guadeloupe-parcnational.fr.

Guadeloupe. Trois-Rivières - Battery of the Grande Pointe, remains of an old military battery 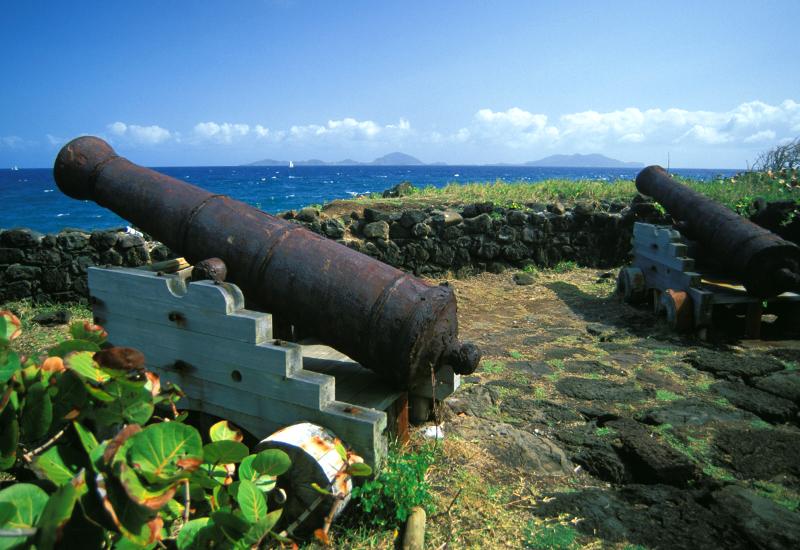