For much of its history, Gourbeyre was attached to the city of Basse-Terre, making it one of the oldest settlements in Guadeloupe. Originally inhabited by Amerindians, this mountainous region offered combatants an impregnable refuge during the many battles of the 17th century between the French and British. At the start of colonization, much of the land belonged to various religious orders (Brothers of Charity, Carmelites, and Jesuits), a state of affairs loudly opposed by the colonists. In the early 19th century, the Bisardy Estate, established in 1705 as belonging to the Jesuits, was one of the largest sugar plantations in Guadeloupe (250 hectares). It was not until the French Revolution of 1789 that the religious orders lost ownership of these lands. In 1802, the commune played an essential strategic role in the brutal conflict between the troops of Napoleonic general Antoine Richepanse, who was attempting to reinstitute slavery, and those fighting for freedom under the command of Louis Delgrès and Joseph Ignace. One of the pivotal events in this confrontation took place in the hamlet of Dolé.
The commune of Dos-d’Ane (“Donkey’s Back”) was established by colonial decree on September 20, 1837. The areas included in this mountainous commune were drawn from the parish of Mount Carmel, Saint-Charles Mountain, Palmiste Plateau, the Dos-d’Ane area, and part of the parish of Trois-Rivières, in Dolé. On February 26, 1846, acting on a proposal by Mayor Louis-Philippe Longueteau authorized by the king, the commune changed its name from Dos-d’Ane to Gourbeyre in homage to Admiral Augustin Gourbeyre, Governor of Guadeloupe, who provided distinguished leadership during the Pointe-à-Pitre earthquake of 1843. At that time, Gourbeyre’s economy was exclusively agricultural. In 1844, it was home to 173 plantations (coffee, food crops, and a few cotton and tobacco plantations) and five sugar factories. The abolition of slavery in 1848 was followed by a critical loss of manpower and a precipitous decline in production. In response, the plantations hired immigrant contract workers.
In 1850, former masters, newly freed slaves, whites, blacks, and men of color voted in an election for the first time under universal suffrage. The new mayor, Stanislas Michineau, friend to black farmers, died a few months later. The commune’s first public school opened its doors in 1854, during the term of Michineau’s successor, Saint-Léger Longueteau. In the early 20th century, the commune entered a period of economic transition. Sugar cane gradually disappeared from the fields, while cacao plantations and chocolate factories continued operating until the eve of World War II. Coffee, which constituted the bulk of the commune’s exports, was eventually replaced by bananas, as Gourbeyre became the third-largest banana-producing commune on the island. During the first half of the 20th century, Gourbeyre continued to maintain its agricultural base while developing a spa-based tourist industry around a number of hot springs, in particular those of Dolé, already well known to rheumatism sufferers from the time of the Carmelites. Spa activities ceased at this site in the early 1960s.
The political life of Gourbeyre was largely shaped by Amédée Valeau, who served as communal mayor from 1932 to 1977, and by Lucette Michaux-Chevry (former President of the Conseil Régional, former minister, and mayor from 1987 to 1995). Although bananas remain a major export crop, many farmers now cultivate vegetable crops (lettuce, tomatoes, chayotes, yams, taro root, cucumbers, etc.). Gourbeyre is also home to a number of plant nurseries, some of which employ hydroponic gardening techniques.
An essential stop between Basse-Terre and Pointe-à-Pitre, Gourbeyre (population 8,160) is committed to maintaining its prominent role as an economic force and government center, under the leadership of its mayor, Luc Ademar. The commune’s Bisardy sector is home to the Departmental Archives of Guadeloupe; the Regional Directorate for Commerce, Competition, Consumer Affairs, Labor, and Employment (DIECCTE); the Regional Health Agency (ARS); and the MDPH (departmental office for the disabled). The Guadeloupe Volcanology and Seismology Laboratory is also located here, atop Houëlmont peak. Since 1995, the commune has enjoyed a renewed economy, spurred by a robust planning policy, the activities of the Grande Savane Artisanal Business Park and the Rivière-Sens mixed economic development zone, and by the presence of marquee companies such as the Capès-Dolé bottling plant; the “Sablières de Guadeloupe“ sand and gravel plant; and the Phytobokaz Laboratory, producer of cosmetics and food supplements based on active ingredients derived from Caribbean biodiversity. The commune is also promoting its natural sites and developing pleasure sailing, in a bid to become one of the island’s top tourist destinations.
Thanks to high-quality athletic and cultural infrastructures, life in Gourbeyre is organized around many different events:  exciting basketball matches organized by the AOG (Gourbeyre sports association), sailing competitions, the parade at Carnaval, and the “Fête Patronale” (Local Heritage Festival in November)—all of which contribute to making Gourbeyre (twin city of Montauban, on mainland France, since 2000) an active, welcoming place. Committed to all of its citizens, the commune is supported by numerous non-profit organizations that play an important role in ensuring quality of life.

Located at the delicate transition point between the island’s Côte-au-Vent (windward coast) and Côte-sous-le-Vent (leeward coast) regions, this 22.5-km2 commune is traversed by many streams, among them the Galion and Grande-Anse rivers. Bounded by the La Soufrière volcano to the north, the Caribbean Mountain range to the east, and a lengthy shoreline to the south, Gourbeyre possesses many assets, in terms of both climate and geography, that have made it a vacation destination throughout its history. In this lush, tropical setting, visitors may explore natural sites in varied landscapes, including mountain rainforests, intermediate forests, and coastal dryland forests. The entrance to the town of Gourbeyre may be found on National Highway RN1 in the area known as “Dos d’Ane,” marked by two beautifully landscaped traffic circles, one testifying to the city’s past, the other to the role of water. Several edifices bear witness to Gourbeyre’s history:  the church of Saint Charles Borromée; the fountain—so useful during the time of the cholera epidemic—the public square; Town Hall; and the bust of Gourbeyre overlooking the valley. Not far from town, at the foot of Morne Boucanier hill (elevation 330 meters), lies the peaty bog of Valkanaërs. The town is an ideal jumping off point for touring the surrounding area. Northward lies Palmiste Plateau (elevation 530 meters), with its spectacular views. The 18th-century Grisel Battery military site sits atop a rocky outcrop there on the Pompilius estate. The Saint-Jacques (or Longueteau) Plantation is nearby, with its remarkable 1930s building that won second prize in the 2013 Concours régional du patrimoine (“Regional Heritage Contest”). Continuing upward past banana plantations and vegetable farms, visitors enjoy unobstructed views of Herminier Peak (summit of the Madeleine massif), the Caribbean Mountains, and the ocean, where, in clear weather, the outlines of the “Saints” islands may be seen. From a trailhead on Moscou Road, hikers may access “Bassin Bleu” (“Blue Pool”) at the bottom of a beautiful cascade on the Galion River, as well as the beautifully picturesque “Parabole” pool (elevation 600 meters) further up. Other trails lead to mountain lakes such as As de Pique, Grand Etang, Etang Roche, and Etang Madère. Take Highway D7 toward Trois-Rivières to the hamlet of Dolé to visit the Dolé hot springs. Two pools are available:  Bain des Amours (“Lovers’ Pool”) and Bassin Public (“Public Pool”). Both are veritable “natural jacuzzis” offering deliciously warm water that was enjoyed by the Amerindian people well before the advent of European colonization.
The commune offers other pleasant outings between Champfleury and the Rivière-Sens marina or Vieux-Fort, across the beautiful Caribbean Mountain chain that traverses the communes of Gourbeyre, Vieux-Fort, and Trois-Rivières (highest peak, Vent Soufflé at 687 meters). The Gourbeyre portion of this mountain range features agricultural fields and woodlands, including different types of tropical forests with rare plant species. Many birds nest here or use the area as a “rest stop” during their migrations. The tour of Houëlmont peak (elevation 428 meters) starting at Rivière-Sens is an exceptionally enjoyable outing.
Traveling Highway N1 in the direction of Basse-Terre, turn left toward Saint-Charles to visit the recently restored Chapelle Saint-Jean Bosco, a veritable institution in Gourbeyre. Further on, visit the Sylvathèque in the hamlet of Blanchet to learn about tropical forests. Past the Sylvathèque, the road descends to the hamlet of Bisdary, site of the former Bisdary Plantation, as noted on historic monuments (no site visits). Bisardy is home to the Observatoire volcanologique et sismologique de Guadeloupe (“Guadeloupe Volcanology and Seismology Laboratory”) and the Departmental Archives (Guadeloupe’s memory), which contains 3,000 works, the oldest of which dates to 1650. This is the headquarters of the “Guadeloupe Historical Society” and the Antilles branch of the UNESCO International Council on Archives. On the other side of the highway, northern Blanchet is home to two institutions of great importance to the life of the commune:  a private professional high school (lycée professionnel privé, or LPP) and “Notre Dame de la Résurrection,” a Carmelite Monastery.
Return via the National Highway toward Rivière-Sens, a recreational paradise. Take a moment for a peaceful stroll to watch the sailboats and take in the activity of the fish market, whose particularly pleasant daytime atmosphere extends into the evening, with many shops and restaurants. Just a few steps away, a very pleasant beach tempts visitors to its black volcanic sands for some well-deserved idleness. On the way to Vieux-Fort, be sure to note the “roche du diable“ (“devil’s rock”) marking the boundary between Gourbeyre and Vieux-Fort, and the fascinating, erosion-sculpted cliffs. - www.villegourbeyre.fr. Chemin Bleu tourist maps of Guadeloupe and city street maps are available at the Office of Tourism. 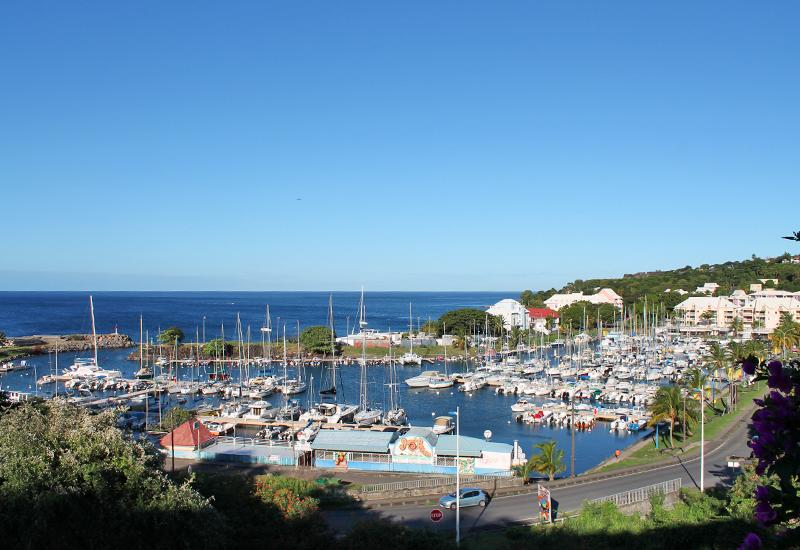 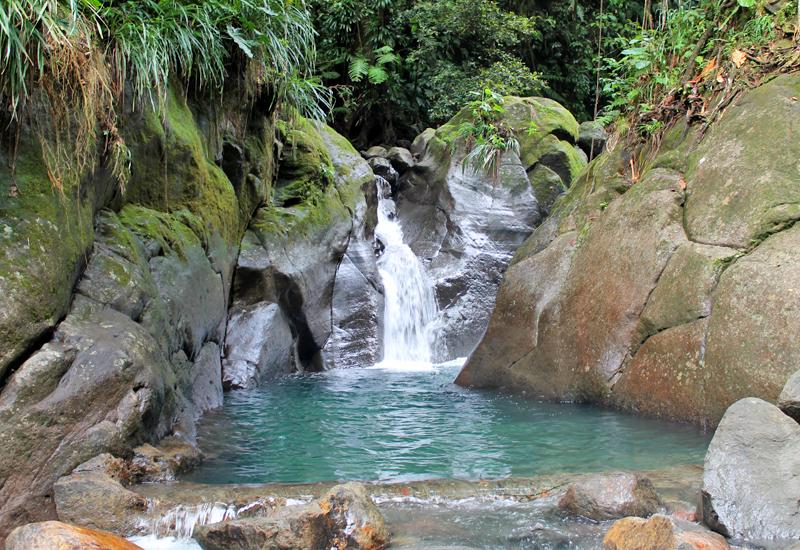 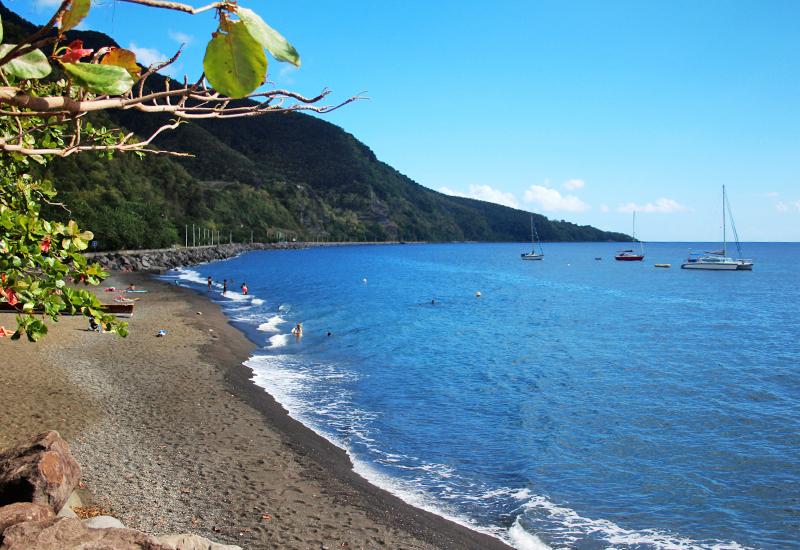 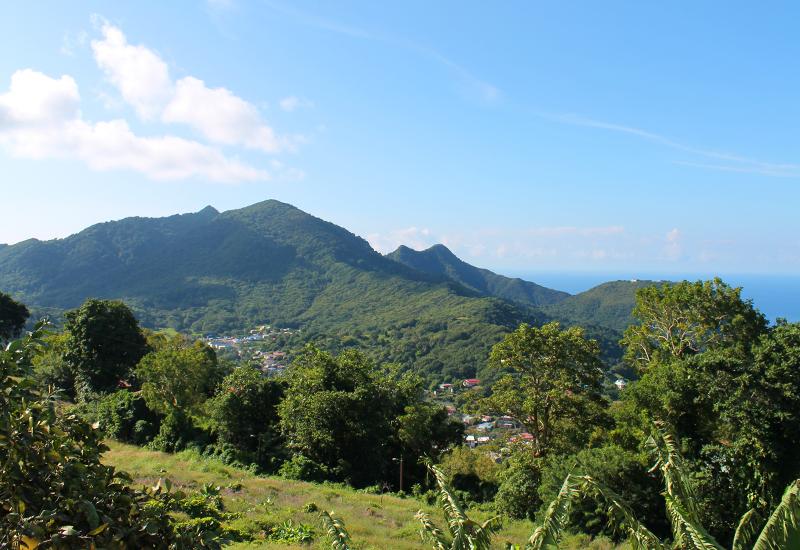