Sainte-Anne:  A Natural Paradise with Much to Discover

Sainte-Anne owes its name to Queen Anne of Austria, mother of Louis XIV and wife of Louis XIII. The commune was established in the 18th century, and was initially Guadeloupe’s seat of government.
During the 19th century, Sainte-Anne was a major sugar-growing center. In 1885, 34 sugar plantations operated within its borders, sending their cane for crushing to one of the three steam-powered refineries that dominated the region:  Courcelles, Marly, and Gentilly.
Architecturally, only a few buildings survived the series of terrible natural disasters (fires, hurricanes) that struck the commune in the early 20th century. The parish church was rebuilt by architect Ali Tur, dispatched to Guadeloupe by the Ministry of the Colonies in the wake of the hurricane of 1928. Place Schœlcher (“Schœlcher Square”) is a popular public space for greeting friends and taking a moment to relax. This pedestrian area is flanked by several public buildings, including the church, Town Hall, and post office, as well as banks and many businesses.
Celebrated neoclassical painter Guillaume Guillon Lethière was born in Sainte-Anne in 1760. A street running parallel to the shoreline is named for him. Lethière won second prize in the Prix de Rome of 1784. Although inspired by Greek and Roman history, his paintings bear witness to his own era, in two instances in particular:  The Oath of the Ancestors, which hung in the cathedral in Port au Prince, Haiti; and The Treaty of Leoben, which hangs in the Palace of Versailles.

With its lagoon protected by the coral reef and clear water, the communal beach located in the city is very busy. Illuminated until midnight, it benefits from the communal agents of a supervision of swimming between 8am and 18pm on the zone included (300 m) between the nautical area and the first rip raps. The nautical base installed on site is part of the regional project promoting the development of the economic sector related to boating. All audiences are concerned. It is a privileged place for events and the training of boating professionals. Several disciplines are practiced including traditional sailing with more than 1500 students, sailing, windsurfing and kayaking. The nearby market, the many restaurants and the sorbets sellers help to liven up the place. Further west, Les Galbas, between the Caravelle beach and the communal beach, with its fishing port and beach. This district constitutes a sector with strong economic and tourist stakes. The beach, although lined with a lace of dried seaweed, has several advantages that make it a very friendly place. Easy access, close to the fishermen of the adjoining port, overlooking the beautiful lagoon where glide quietly windsurfers and kite-surfers, quiet, in the shade of coconut trees, just in front of the beautiful pond of small pond Baghio. Some parties are given there and every third Sunday of the month, there is the flea market.
The town of Sainte-Anne has a strong sports tradition (well known soccer player Marius Trésor is a native son), as illustrated by its many teams and clubs, including Intrépide, winners of the French Division 2 National Women’s Handball Championship; the Racin’beach volleyball team; the VCS (Vélo Club Saintannais) cycling club; the ACSA Athletic Club (track and field); and the Juventus soccer club.
Cockfights, pulling bull contests, and traditional sailing events (using two-masted wooden dinghies) still arouse great passions among spectators. Le Pitt, a cockfighting venue located at Fouché, is known well beyond the commune’s borders. Cockfights generally take place all day on Sundays between November and the end of July. Pulling Bull contests give local farmers an opportunity to renew contacts, discuss local issues, and showcase their breeds. Little by little, such events have won the hearts of the public and piqued the curiosity of visitors, who attend them in greater numbers each year.
In Sainte-Anne, traditional sailing is an institution, with over 1,500 students receiving training from the coaches and leaders of the Club Nautique (Water Sports Club). The local farmers’ market is held each Thursday night at Valette. The flea market takes place on the third Sunday of each month. Outings, tournaments, and traditional sports bring people together for socializing. Life in Sainte-Anne is also enriched by festivals, sports presentations, performances, and exhibitions. The popularity of such events among tourists and Guadeloupians alike is a testament to the efforts of various local Sainte-Anne organizations, and the active involvement of its citizens.

• December:
The town of Sainte-Anne’s “Festival of Light,” which includes a Nighttime Christmas market, opera / gospel concert, Christmas song festival, and the “Explosive Nights” fireworks contest (the first in the Caribbean).

The commune of Sainte-Anne (population 24,611) covers an area of 8,027 hectares. Though now dedicated primarily to tourist development, the economy of Sainte-Anne has always had an agricultural base. The commune owes much of its appeal not only to its charming town, but also to the fascinating contrast between its coastal and inland regions, the latter being known as “Grands Fonds” (“Big Bottoms”).
The town beach offers many activities for both children and adults. The joys of sailing, windsurfing, and diving are easy to get hooked on here. Traveling along the coast toward Saint-François, stop by magical Bois Jolan Beach, which is steeped in history. This magnificent windswept beach is several kilometers long, and is considered the ultimate in family beaches. Five kilometers further down the road, in the hamlet of “Le Helleux,” lies Gros Sable (“Big Sand”) Beach, a surfing paradise and protected area of great rustic charm. Traveling in the opposite direction from town, toward Pointe-à-Pitre, the famous half moon-shaped Caravelle Beach (aka “Club Med Beach”) welcomes visitors to its crystal-clear lagoon.
Known as “Guadeloupe’s Pantry,” Grands Fonds is a backcountry region with an unusual geography and topography resembling a sort of giant waffle dropped down in the middle of Grande-Terre Island. Its many small valleys (the so-called “fonds,” or bottoms) are separated by sometimes elongated hills called “mornes” that criss-cross one another in places. Lush and verdant, Grands Fonds might also be called “Guadeloupe’s “Salad Bowl,” as it offers perfect conditions for growing fruits and vegetables. The richness and diversity of this region’s ecosystems make it unique in the world. An estimated 90% of the medicinal plants present in Guadeloupe may be found here. Cacao, coffee, and orange trees grow in rare harmony in this soil, which is both chalky and clay-like.
Travel over Departmental Highway D111 from Dupaty Mill past Gentilly and Richeplaine to reach Departmental Highway D115. This road traverses lands named for the refineries that once operated on them, which played a central role in local history. At Pont Ballon, a beautiful lane nearly 400 meters long lined with “poirier-pays” (“pink trumpet flower”) trees still leads to the old Marly plantation site, across sugar cane fields now belonging to the Gardel refinery.
In addition to its natural sites, Sainte-Anne offers reasonable guest accommodations at approximately ten hotels—including Club Med, La Toubana, and Pierre & Vacances—and forty guesthouses. A well-crafted environmental policy gives tourism in Sainte-Anne a “green” dimension that is welcomed and appreciated by all. Chemin Bleu tourist maps of Guadeloupe and city street maps are available at the Office of Tourism. 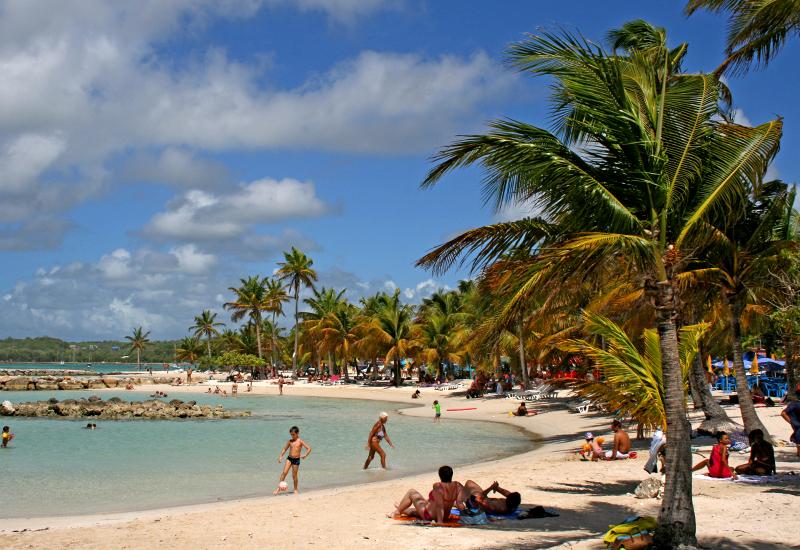 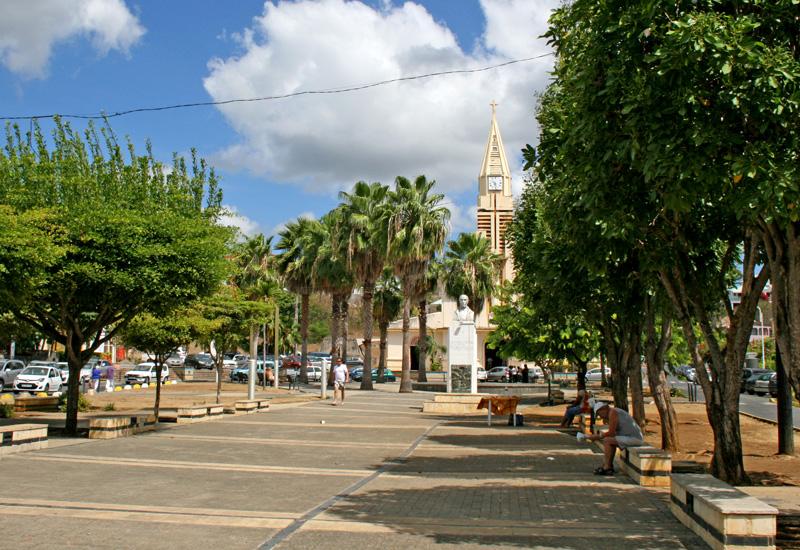 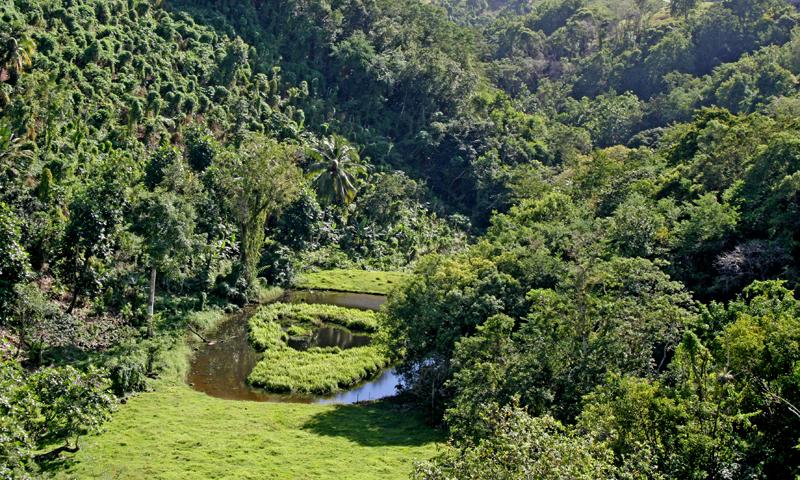 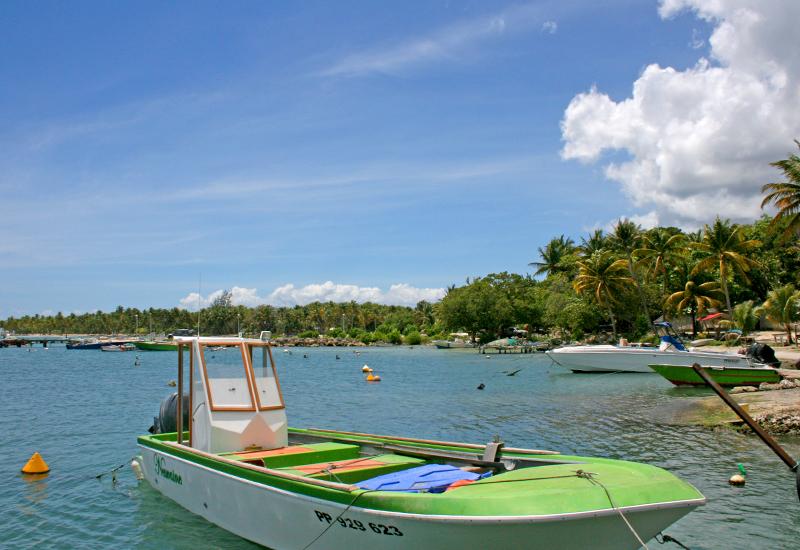