Inhabited by Amerindians from as early as a few centuries before the Common Era, this former fishing port has been the scene of naval battles and tragic events, and the victim of numerous hurricanes. Through it all, Le Moule has remained a land of action and cultural exchange.
The commune of Le Moule covers an area of 82.9 km2 extending back from the Atlantic Ocean. In this vast territory, home now to 22,000 residents, coffee and cotton long played as important a role as sugar cane.
From the commune’s sugar cane past (58 working sugar plants in the 19th century, including Marly, Zévallos, Duchassaing, and Gardel), a number of interesting sites remain, in particular the Gardel sugar plant and the Damoiseau distillery. Many windmills may also be seen, some over 10 meters tall with meter-thick walls, in Sainte-Marguerite, Saint-Guillaume—one of the most original, with its rounded silhouette—Château-Gaillard, Sommabert, Pavé, and one at the former Néron plantation, dating to the 18th century.
A multi-activity agricultural hub, with sugar cane fields, grazing lands, food crops, orchards—and, in particular, the development of melon-growing operations—Le Moule maintains an economic position worthy of its past.
Bordered by two beaches, La Baie (“The Bay”) and l’Autre Bord (“The Other Side”), Le Moule enjoys a mild climate. The coastland is especially worth exploring, with its dramatic cliffs and rugged limestone points. On either side of the town of Le Moule, mangrove swamps may be seen. This form of vegetation, which exists only in the inter-tropical zone, is made up of red, white, and black halophyte trees that provide habitat for a multitude of fish and crustaceans, and serve as a refuge for fauna that feed or reproduce here.
Le Moule has been the site of significant archeological research. Items uncovered in these excavations are on display at the Musée Edgar Clerc, bearing witness to the passage through the region of the Huecoid and Arawak people. Pottery, shell jewelry, axes, stone tools, and little “adornos” (small figurines that decorated vases) make up a rich collection.
The city of Le Moule is characterized by diverse artistic and athletic activity. Vibrating to the beat of traditional gwo ka, martial mayolé dances, the quadrille of our European ancestors, and classic Indian dances, the town is host to unforgettable performances. As for sports, the commune’s geographical assets offer many possibilities. Water sports are among the most popular, primarily surfing, with international competitions held each year. Kayaking is also available from the base at l’Autre Bord beach, along with water scooters and jet skis, Le Moule having hosted the World Jet Ski Championship multiple times. Paragliders gather at Bois-Baron, accessible from Sainte-Marguerite road. Land sports are played in various stadiums throughout the commune or along the beaches, with beach volleyball and sand soccer growing in popularity (the town has organized a number of competitions).
The Pulling Bull contest has been enjoying a major resurgence among the local population; two associations in Le Moule—the “Frappeurs” (“Strikers”) and the “Baroudeurs” (“Brawlers”)—provide lively spectacles. In the rings of three “gallodromes” (Zévallos, Caillebot, and Chateau-Gaillard), otherwise known as “cock pits,” cock fights attract avid gamblers.

Up until the early 19th century, the town was located on the right bank of the Audoin River in l’Autre-Bord. Despite several hurricanes (most notably in 1739 and 1928) and earthquakes (particularly that of 1843), the town continued to grow. For this reason, in order to facilitate trade and provide room for a church and new houses, the town was moved to the wide plateau it occupies today, where a distinct architectural style emerged. Creole two-story “haut et bas“ houses (private quarters upstairs and a business below), embellished with wrought iron balconies and tall windows, can still be seen on the following streets:  Joffre, Jeanne d’Arc, Saint-Jean, Achille René-Boisneuf—location of the Léveillé House—and Albert 1er—location of the former Romana House.
Offering good anchorage, the port of Le Moule was a busy one from the 18th to the middle of the 19th century, as most of the sugar cane produced in Grande Terre transited through here. The port was also home to many warehouses storing essential commodities, including coal—Indispensable to the island’s forges and locomotives—fertilizer, factory parts, and provisions for surrounding communes.
Now dedicated to fishing, which has remained an essential economic activity, the port welcomes nearly 150 fishermen a day. Fish and lobster are sold early in the morning or during the day at the fish market.
Testifying to an eventful past punctuated by battles—most notably in 1809, when Commander Coudroy de Lauréal made a name for himself driving back the British—remnants of a powder magazine and battery with four pieces of artillery may be found behind the town hall (at the entrance to the old port), along with the ruins of a small fort (Cadenet neighborhood).
The first stone was laid for the Town Hall on October 28, 1926, by Mayor Charles Volanges Romana. The building’s symmetry and geometric forms make it one of a kind. From its steps, visitors have an unimpeded view of the always-lively central square, dominated by the parish church of Saint Jean-Baptiste. Now classified as a historic monument, this religious edifice was built between 1848 and 1850 in the neo-classical style. It is characterized by a carved stone façade, majestic interior and exterior columns, and the wood-paneling of its interior, which extends from the wood-paneled vault to rounded columns supporting Roman arches. Ali Tur designed the bell tower following the hurricane of 1928.
The streets of Le Moule are very lively, even on Sundays, when locals and visitors gather to shop, stroll, and take their mind off things. The town is equipped with infrastructures adapted to the town’s needs (departmental slaughterhouse, waste reception center, etc.), and has been undergoing significant modernization for several years. The construction of a waterfront boulevard, at the west end of town near the ice rink, not only protects the town from breakers, but also offers a pleasant place for strolling.
Along the waterfront boulevard, the Damencourt commercial area, home to a number of housing complexes and many businesses and services—including a medical center and the Baie Side shopping center—is a boost to the town’s economy. In addition to many general practitioners, medical specialists have also located in Le Moule:  ophthalmologists, cardiologists, speech therapists, gastroenterologists, gynecologists, physical therapists, dentists, medical laboratories, a medical imaging center (X-ray, ultrasound), and more.
In terms of public transport, buses leave for Pointe-à-Pitre from the Cadenet residential area, for Saint-François from the corner of Rougé boulevard and Rue Galliéni, and for Grands-Fonds from the corner of Duchassaing and Rougé streets. Le Moule has an extraordinarily active art and culture scene, with a well-structured multimedia library, the Robert Loyson cultural center (with a multipurpose hall for cinema and live performances that seats 400), Espace Wizosky (a recreational space that welcomes the occasional musical group), and the activities of various organizations. Events are held throughout the year:  Fête du Patrimoine (“Heritage Festival”), Carnaval, Surfing Championship, Local Heritage Festival, Miss Moule Pageant, Reine des Aînées Pageant (“Queen of the Elder Sisters”), the “16 kilomètres du Moule” race, l’Estival de Mayolé (martial dance festival), Fête des marins-pêcheurs (“Fisherman Festival”), Pulling Bull Contest, cock fighting, traditional Christmas market, Christmas caroling, not to mention the flea market held the second Sunday of each month.
www.mairie-lemoule.fr - www.ot-lemoule.fr. Chemin Bleu tourist maps of Guadeloupe and city street maps are available at the Office of Tourism, Damencourt, Spot de surf - Tel.: 0590 23 89 03 – email:  info@ot-lemoule.com - www.ot-lemoule.com 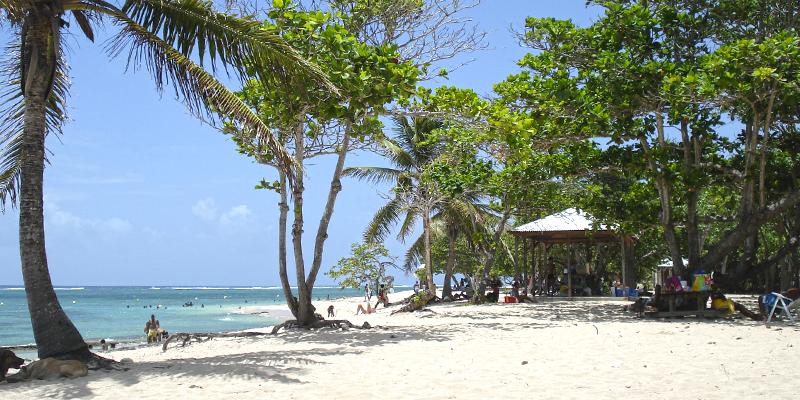 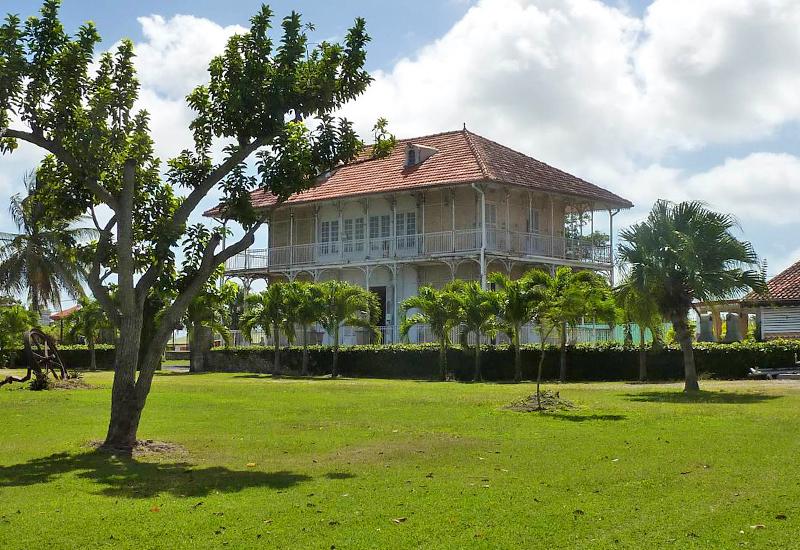 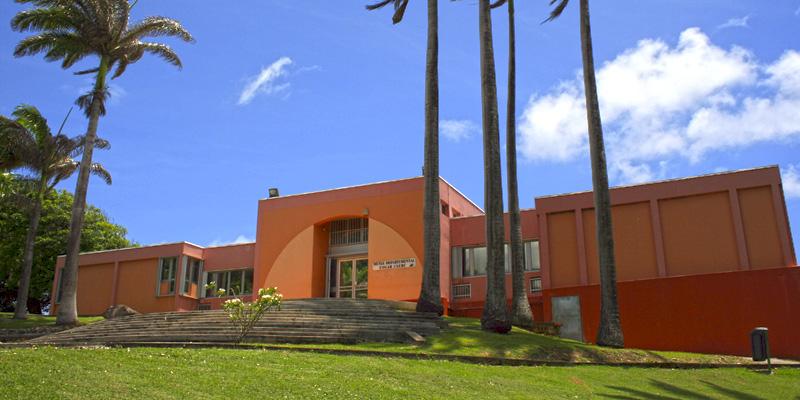 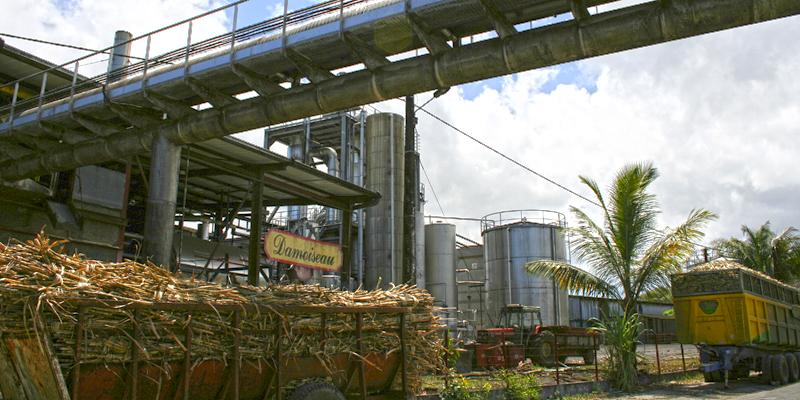