Memorial to the First Day

This memorial, situated on the Darse (meaning “dock” or “port”) at the corner of rue Duplessis, is the result of a joint initiative by the  Departmental Council and “Bharat a gua,“ an association of pro-Indian groups in Guadeloupe. The work, a sculpture in beaten copper, is the creation of Indian visual artist Inderjeet Sahdev. It was unveiled in December 2004 to mark the 150th anniversary of the arrival of the first Indians in Guadeloupe. The monument not only recalls the arrival of these first Indian immigrants on Guadeloupian soil, but also pays tribute to those who created the multicultural Guadeloupe of today by acknowledging Indian cultural heritage as an essential element in the island’s pluralist culture. Following the second abolition of slavery in 1848, there was suddenly an acute shortage of labor on the plantations. Sugar cane production was in decline, and a new way of relaunching the economy had to be found. However, the plantation owners considered the freedmen’s salaries demands excessive, so to keep costs down, they turned to immigration as the only viable solution. They looked towards India since it had already provided a profitable solution for the British, who had employed “coolies” very successfully. The idea was adopted all the more readily given that France already had five trading posts in India, namely Pondicherry, Chandernagor, Yanaon, Karaikal and Mahé. In theory, potential Indian emigrants had to give their consent before receiving their boarding papers; however, it’s clear that recruiters used false promises to persuade many Indians to leave their country for the French colony. During the period from 1854 to 1860, Indians were recruited in all five trading posts, departing from the French ports of Pondicherry and Karaikal. During the second period, from 1861 to 1889 (the date when controlled immigration ended), French recruiters operated throughout the whole of India, then part of the British Empire. It was on Christmas Eve, 1854 that the first Indian immigrants arrived aboard “L’Aurélie,” commanded by Captain Blanc; the ship contained 314 passengers. Over the following years, 95 convoys transported a total of 42,000 Indians to Guadeloupe. Each worker signed a five-year contract, renewable for the same period at the end of the term. A total of 24,891 Indians died, 9,460 returned to India, and the remainder settled permanently in Guadeloupe. 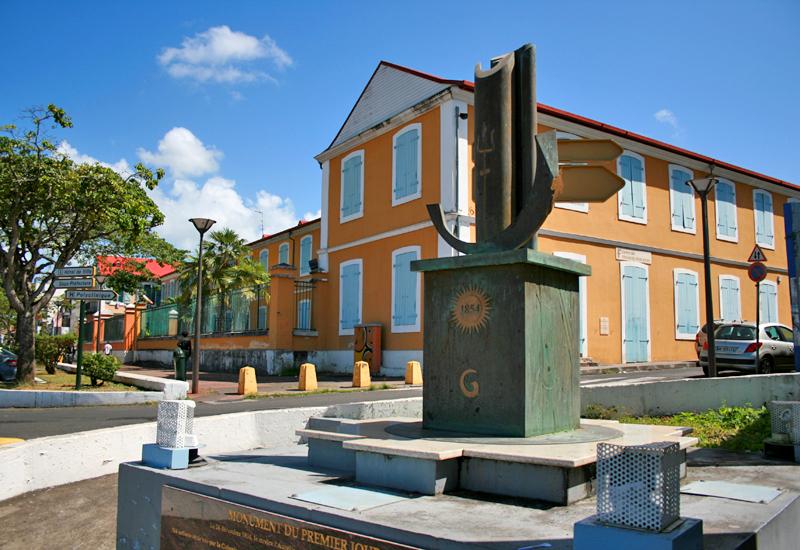 Tribute to those who founded multicultural Guadeloupe 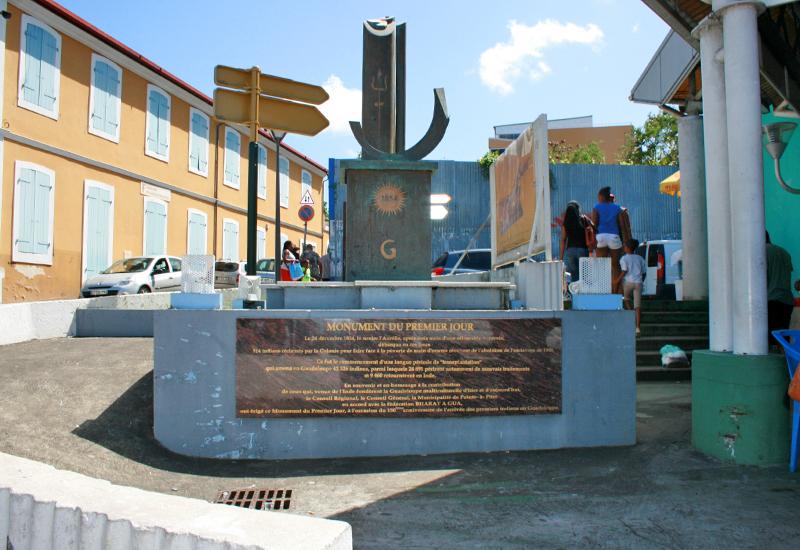 Monument to the first day. It was in 1854 that the first boat “L’Aurélie“ arrived, with 314 passengers