The history of Terre-de-Haut has been determined, above all, by its harbor, reputed to one of a limited number of “the world’s most beautiful bays.” However, in the 9th century, the Amerindians stayed here only a short while, preferring to settle on islands with abundant rivers, such as Guadeloupe and Dominica.
During his second voyage to the Americas, Christopher Columbus named this group of islands “Los Santos” (The Saints or, in French, Les Saintes), after landing here on November 4, 1493—All Saints Day. At that time, these islands were mainly the repair of buccaneers and privateers. During the 16th century, the Spaniards made several attempts to settle them, opting each time for the Greater Antilles and South America instead, leaving the French and British to battle it out for possession of them, which they did for two centuries.
The first colonists landed on Terre-de-Haut in 1650 at the behest of Governor of Guadeloupe Charles Houël who acquired ownership of Guadeloupe and Les Saintes after creating the Compagnie des Iles d'Amérique (Company of the American Islands). The island’s colonization coincided with the beginning of slavery. However, lack of water making it impossible to grow sugar cane here, the number of slaves laboring on the island never gained massive proportions. The late 17th century was a period of intense fighting between French and British forces for possession of the island. In 1664, French finance minister Jean-Baptiste Colbert purchased Guadeloupe and its dependency, Les Saintes, for the French crown. A few decades later, the British returned to seize control of Guadeloupe, which they held from 1759 to 1763, year in which the Treaty of Paris was signed. Over the course of the 18th century, new colonists arrived, the majority of them from the Normandy, Brittany, and Poitou regions of France. Fishermen, carpenters, adventurers, and seekers of new horizons, together they would form a new people:  the “Saintois.”
This respite from British rule was short-lived:  in 1782, the Armada of Sir George Brydges Rodney, Vice-Admiral of England, destroyed the French flotilla during the “Battle of the Saintes,” resulting in British domination of the territory until 1794 and the arrival of Victor Hugues. However, conflicts between British sailors and French privateers still raged throughout the Lesser Antilles, with both sides taking turns occupying parts of Les Saintes, keeping a wary eye on one another. The strategic location of Terre-de-Haut and constant confrontations between the French and British navies left an exceptional military legacy here. The year 1777 marked the beginning of construction on a number of defensive structures, including Fort Louis (which would become Fort Napoleon), Fort Josephine, and several batteries on a number of the island’s points:  Tête Rouge, Vieille Anse à Marigot, Anse à Cointre (at Pain de Sucre mountain), Fort Caroline, Cabrit Islet, La Vigie Tower, and more.
In 1809, the British armada conquered the archipelago under Admiral Cochrane. In a glorious episode of Les Saintes history, three young men—Jean Calo (for whom a street is named), Cointre, and Solitaire—managed to extract three French vessels by guiding them through the northern pass known as La Baleine (“The Whale”). In spite of this successful feat of daring, Les Saintes capitulated to the British. Seven years later, in 1816, Les Saintes passed definitively into French hands under the terms of the Treaty of Venice.
The hurricanes of 1825 and 1865 devastated the island. In the late 19th century, Cabrit Islet became a place of quarantine. Over the course of the 20th century, Terre-de-Haut finally lost its strategic significance, although many French naval vessels, as well as the "Jeanne D'Arc" training ship, still moored in its harbor. After the terrible hurricane of 1928, reconstruction efforts were accompanied by a concerted effort by the entire population to develop an exceptional quality of life and usher Terre-de-Haut into the era of tourism. The airfield was built in 1966, and the first hotel, on the flanks of Morne à Cointre, was added in 1969. In 1972, a desalination plant was installed, now replaced by  an underwater pipeline bringing fresh water to the island from Guadeloupe. The island has taken steps to showcase its history, with Fort Napoleon receiving more visitors each year. The ongoing efforts of the municipality and its residents have born fruit:  in 2008, the commune became a member of the National Association of Mayors of Ranked Resorts and Tourist Communes. United around their core values and proud of their traditions, the residents of Terre-de-Haut hold regular events to honor their religious heritage—the blessing of houses, boats, and the sea (August 16)—as well as religious celebrations and sporting events, in particular, “saintoise” regattas (traditional fishing boats without a deck native to the Saintes islands, which can be rowed or sailed), many of which are still used by fishermen.

Tourists arriving in this famous bay, with its dozens of boats at anchor, colorful houses spread out along the shore or perched on the island’s heights, bustling town, and smiling residents, know immediately that their stay here will be a memorable one. Visited by over 300,000 tourists each year, Terre-de-Haut (population 1,787, area 522 hectares) is one of the most popular destinations in Guadeloupe. Here, without cars, people walk freely along the narrow lanes lined with wooden houses before taking off across the island to discover its fascinating natural and historical heritage. In the center of the town stands the Town Hall overlooking a small, shady square. Stop to admire the church, constructed of volcanic rock, a few steps away. With its pastel colors, decorative murals, and joined roofs, the traditional Saintois house is central to the Saintois lifestyle. The municipal Office of Tourism is located on the square in the former Gendarmerie (national police station). Boutiques and restaurants create a lively scene, along with street vendors selling the famous local pastry, “tourment d'amour“ (“agony of love”).
Rue Jean Calo, to the east, leads to Morne Mire (“Target Hill”), where Fort Napoleon proudly stands. The road is lined with cactuses, frangipani trees and, from May to late July, Poinciana trees blooming with showy scarlet flowers. Anse Mire cove is just nearby. As you pass by the “maison bateau“ (“boat house”), take in the view of the harbor with its turquoise waters, and descend the steps to a small cove with crystal clear waters to see famous traditional “canots saintois” boats in their moorings. Next, stroll along the waterfront to a small beach popular with locals for its calm, shallow waters and beautiful sunsets. From the fort, enjoy a breathtaking panorama of the bay, with Cabrit Islet and Pain de Sucre (“Sugar Loaf”) mountain in the distance.
Follow the road to Anse Marigot cove, a place of peace and quiet and marine essences, and take a moment to let its charm wash over you. Hike across Morel Trace to Caroline battery overlooking Pompierre Bay and pause to take in the deep blue of the ocean, intense green of the hills, and a spectacular view of the little port. The hardiest hikers will continue until they reach the ocean and Morel, Zozio, and Le Vent points, where waves crash furiously against steep cliffs. Only a few remnants remain of Fort Caroline, which owes its name to the tragic 1822 romance between an officer of the Royal Navy named Fréminville and Caroline, a young creole. Take a moment to appreciate the view over Pompierre Bay, then descend to the beach to enjoy its view of the Roches Percées (“Pierced Rocks”) that guard the bay.
Further south lies a long strip of sand:  Grande-Anse (“Great Cove”). Not far from there is a cemetery, featuring the funerary monuments of Saintois families rising next to small sand-mound graves outlined in lambi conch shells. A monument to lost sailors may be seen near the filao trees. Residents of the island gather here traditionally for All Hallows Eve (the night before All Saints Day), lighting hundreds of candles that flicker in the night. On the other side of the hill, tucked into a mountain hollow, lies Anse Rodrigue Beach and its turquoise waters. Stop here to take in the view of Grand Islet and relax in the shade of the coconut palms to watch pelicans diving straight into the ocean after their prey.
Rue Benoit Cassin borders Anse du Fond Curé, where there is a fish market frequented daily by fishermen, restaurateurs, and individual customers haggling over prices. A peaceful beach with calm waters lies only a few dozen meters away. The wharf is the island’s vital center, where merchandise arrives from Guadeloupe. At the far end of the cove stands the Tête Rouge (“Red Head”) battery, which offers a beautiful view of the bay on one side, all the way to Fort Napoleon, and Anse Galet and Anse Devant on the other, all the way to Pain de Sucre mountain.
At the foot of Morne à Craie (“Chalk Stick Hill”), Anse du Figuier (“Fig Tree Cove”) features a breezy, deserted black sand beach, reached via a path lined with almond trees, catalpas, and manchineel trees (marked with a red ring because their poisonous sap can burn—don’t stand under one when it rains), with young goats grazing nearby. Dozens of sea birds—pelicans, frigate birds, and terns—can be seen circling Grand Islet and the round rock form of La Redonde. From here, Le Chameau can be seen (elevation 307 meters). After a good climb, hikers are rewarded with an exceptional panorama of the entire island and beyond:  below, the basalt mound of Pain de Sucre (“Sugar Loaf”), with its many nesting birds; nearby, Petite Anse, a prized harbor, with its lovely little beach in the shelter of the rock; and to the south, Anse Crawen. A hike through underbrush takes you to the beach. From here, enjoy a panoramic view of a string of islets. In the evening, after the boats are gone, the island returns to itself, and a peaceful atmosphere descends over the town, as if enchanted. - www.terredehauttourisme.com. Chemin Bleu tourist maps of Guadeloupe and city street maps available at the Office of Tourism. 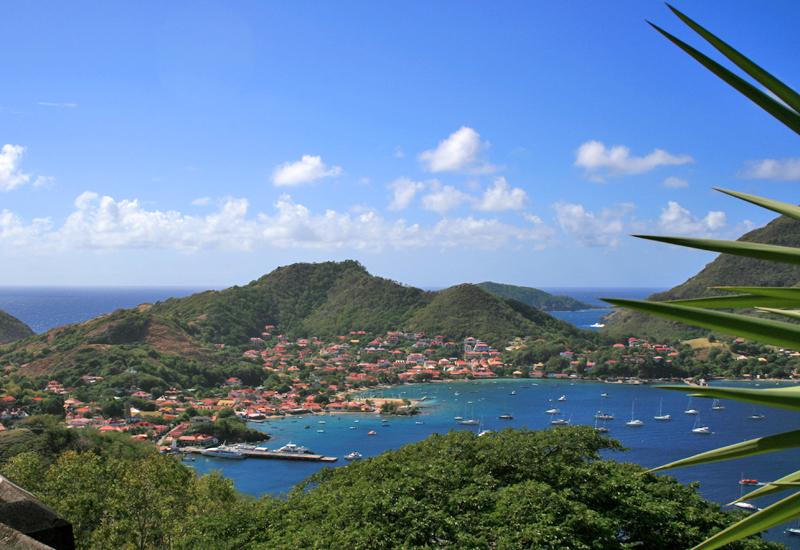 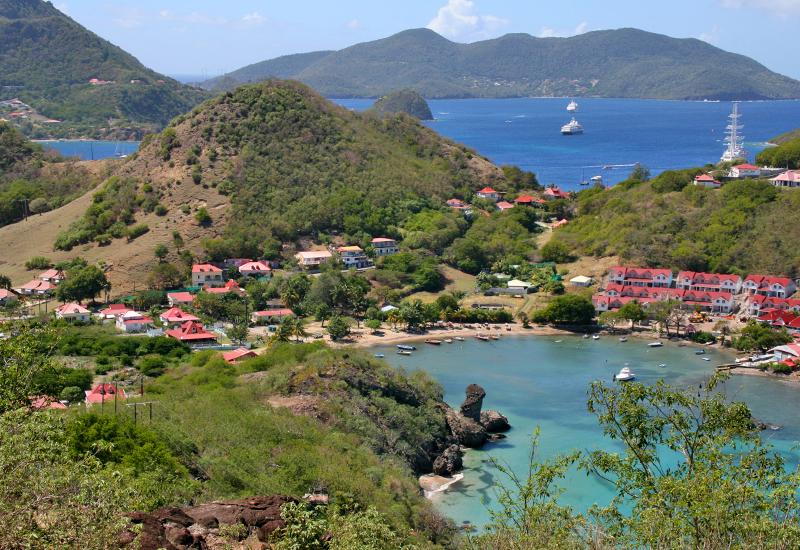 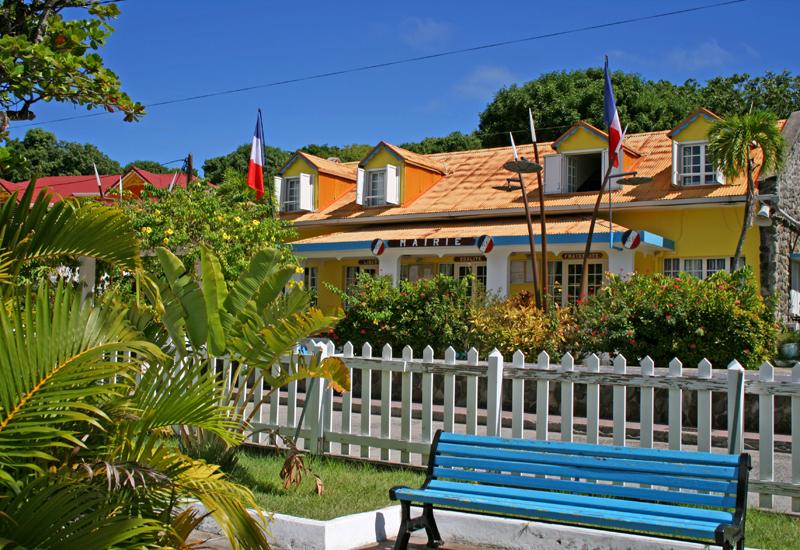 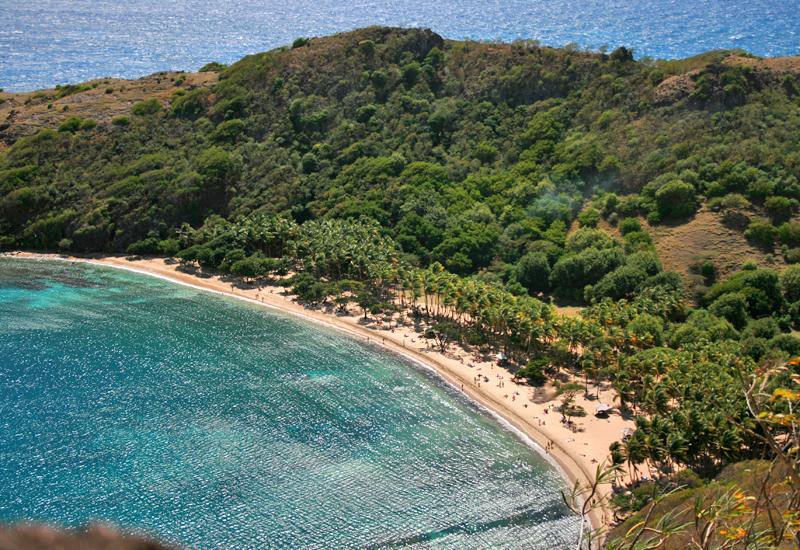