Located at the southern tip of Basse-Terre Island, the commune of Trois-Rivières (area 3,110 hectares, population of 8,755) starts at the foot of the Madeleine mountain range in a profusion of banana plantations and tropical forest and ends by plunging into the sea. Named for the Trou-au-Chien, Petit Carbet, and Grande-Anse rivers, all of which originate on La Soufrière Mountain, Trois-Rivières is likely one of the first areas to have been settled on Guadeloupe. Its fertile soil, mild climate, and protected position favored human occupation from an early date, as evidenced by many pre-Columbian vestiges found along its shore and nearby in what is now the Parc Archéologique des Roches Gravées (“Carved Rock Archeological Park”).
The first French colonists to settle in Trois-Rivières arrived in 1640. The richness of the soil and mild climate were conducive to growing many different crops, including manioc, cotton, coffee, tobacco, indigo, vanilla, and others, all of which contributed to the region’s prosperity. In the 18th century, the area became a favorite among members of the Creole aristocracy, and sugar cane dominated the area’s economy. The appearance of sugar cane, however fleeting, made the fortunes of a few families, but its decline after the abolition of slavery meant bankruptcy for plantation owners. By 1865, only five refineries remained. Vestiges of this prosperous colonial period may still be seen around the commune in the ruins of batteries, refineries, distilleries, and slave dungeons on former plantations.
Like that of neighboring communes, the economy of Trois-Rivières is still based primarily on agriculture—such as banana-growing—and the development of green tourism. The commune continually strives to protect and showcase its rich heritage. Many tourists are drawn here to explore the area’s lush, unspoiled nature, and Trois-Rivières possesses all of the ingredients for a pleasant, satisfying stay. Tourist accommodations generally take the form of guesthouses, rather than traditional hotels. Many find rooms in private homes or on former estates, amid vestiges of the colonial era. Affordable for the majority of visitors, such bungalows and private rooms are very popular among visitors seeking an authentic, exotic experience. The warm welcome of area hosts, often present on site, gives visitors the opportunity to truly get to know the area and its way of life, which constitutes the essence of its beauty and uniqueness.
Thanks to the active involvement of the local population and many organizations, all of which are eager to bring some revelry to life in and around the town, festive events take place in Trois-Rivières throughout the year. February is traditionally devoted to festivities surrounding Carnaval; like every other commune in Guadeloupe, Trois-Rivières pulls out all the stops. Carnaval is a time when everyone, young and old, comes together to blur the line between carousing and caricature as they don colorful, shimmering costumes according to a fixed chronological order. The celebration ends on the final day with a procession of mourners dressed in black and white, symbolizing the death of King Vaval (and Carnaval).
Soon after this, it’s time for the well known Local Arts and Crafts Exhibition and Sale, which takes place on the second weekend in March, showcasing the talent of artists and craftsmen from throughout the region. At the end of April, Trois-Rivières highlights its tradition of hospitality by taking part in “Tropical Flower Weekend,” a competition to see which commune has the best display of flowers in all of Guadeloupe. The event attracts an average of 3,000 visitors each year from every corner of the archipelago, all of whom come to admire anthuriums, lilies of the Antilles, heliconia, alpinia, hibiscus, torch ginger flowers, orchids, oleander, bougainvillea, and rare shrub and flower species. The event is also an opportunity to raise environmental awareness among visitors and residents alike.
May 1st, International Labor Day, is also a time for honoring elders. Always respected, never forgotten, elders represent the living memory of our remarkable past. June 21st is the date of the annual Festival of Music, celebrated to the beat of the gwo-ka Africa-style drum, featuring quadrilles and “biguines,” the most creole of dances. Many small groups playing Guadeloupe Zouk music join in with enthusiastic crowds to bring a little welcome noise to the village’s habitual quiet.
August 15th is Trois-Rivière’s traditional Feast Day, on which it celebrates its local heritage with a mix of pagan and religious folklore events. November is the month for the much anticipated “Rencontres d'Art et d'Histoire“ (“Art and History Encounters”). Throughout the year, the active and enthusiastic youth of Trois-Rivières are involved in sports through many clubs and associations, with teams and players distinguishing themselves in a variety of areas, including handball and soccer, with J.T.R. (Jeunesse de Trois-Rivières); cycling, with U.S.T.G.V.; and the martial arts. The municipal pool features an aqua-gym, swimming events, and even infant swimmer times. The “Hiking and Discovery” section of the local Syndicat d'Initiative (“Chamber of Commerce”) regularly hosts safe hikes over well marked trails, accompanied by experienced guides.

With an exceptionally varied landscape between mountain and sea, a deep historical heritage, and its famous carved rocks, Trois-Rivières offers visitors thrilling experiences and breathtaking scenery.
The town’s commercial center and adjacent streets are always bustling. The covered market, built in 1956, was inspired by the markets of southern France. It was erected during the same period as the Town Hall, and designed by the same architect:  Yvon Chérubin. Its dome of glass panels makes the interior pleasant and bright. The rural traditions of the Trois-Rivières region are on full display here, with stalls covered in a profusion of exotic fruits and vegetables produced by local farmers.
One of the secrets to the charm of this small town is the atmosphere created by its private residences. Stroll through the streets to admire a number of traditional houses, villas, small mansions, and manor homes. The uniqueness of this colonial architecture resides in its wrap-around galleries, picturesque hipped roofs with overhangs, and facades, pierced sometimes only by a door. Interesting and, at one time, controversial, the design of the local church, built in 1933 by architect Ali Tur, leaves no one indifferent. Note also the imposing Town Hall, which seems to tower over the town, offering a beautiful view of the wharf, the point of departure for many shuttles to the Saintes Islands.
The rather steep descent to the wharf is itself a mark of the uniqueness of this commune, isolated between mountain and sea. The Parc Archéologique des Roches Gravées (“Carved Rock Archeological Park”) is nearby, featuring many petroglyphs, a marvel of Amerindian culture that should not be missed. Classified as historic monuments in 1974, these rocks have been scrupulously preserved. The park has been owned by the department since 1981. Covering an area of approximately one hectare, area is characterized by a jumble of volcanic rocks amid lush vegetation, among which stand these mysterious traces left by the Arawak Indians, who occupied the island prior to the arrival of the Caribs. All of the carvings are characterized by rudimentary anthropomorphic elements with schematic figures featuring three holes forming eyes and a mouth, and two semi-circles, indicating ears. On the ground or raised, the rocks likely had religious significance.
The commune’s scalloped coastline features three points:  Grande-Anse, Saint-Jacques, and Grande-Pointe. The port, or “embarcadero,” is ensconced between the first two points, and is accessible to boats of small and medium tonnage. This is the arrival and departure point for regular ocean links to and from Les Saintes.
Hikes over small roads and many marked trails give visitors the opportunity to fully appreciate the commune’s natural environment. A section of trail between Anse Duquery and Pointe de l'Acomat was the object of a 1996 ZNIEFF inventory (Zone Naturelle d'Intérêt Écologique Faunistique et Floristique, or Natural Area of Ecological Interest for its Flora and Fauna), with the aim of devising better protections. Rare specimens are seen in among common forest species, and fruit trees exude delicate perfumes. Hikes also offer many opportunities for stunning views:  on the ocean side, of the Saintes archipelago, and even Dominica, if the weather is clear; on the inland side, of the famous Caribbean mountain range.
Well maintained Grande-Anse Beach features amenities for every water sport, restaurants for dining all around the cove, and pleasant areas for relaxing in the shade of the coconut palms after a long walk. The black sand here reminds visitors of the proximity of La Soufrière volcano, the highest point in the Lesser Antilles - www.villetroisrivieres.fr. Chemin Bleu tourist maps of Guadeloupe and city street maps are available at the Office of Tourism. 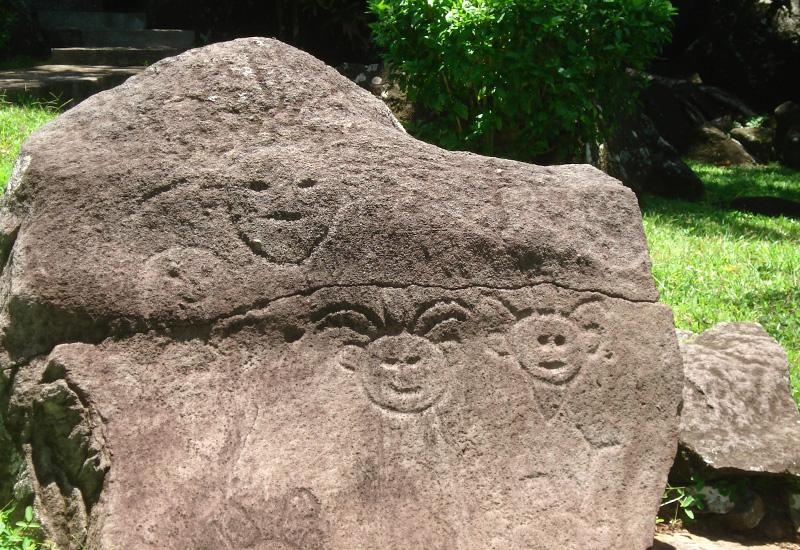 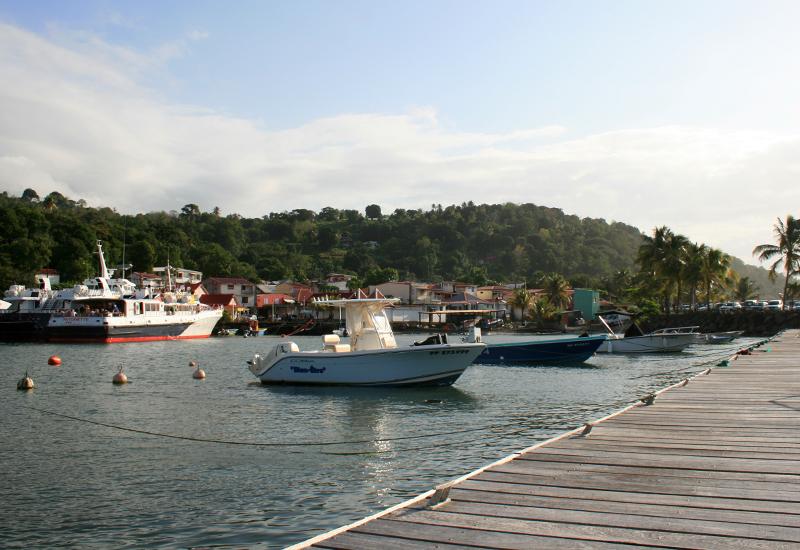 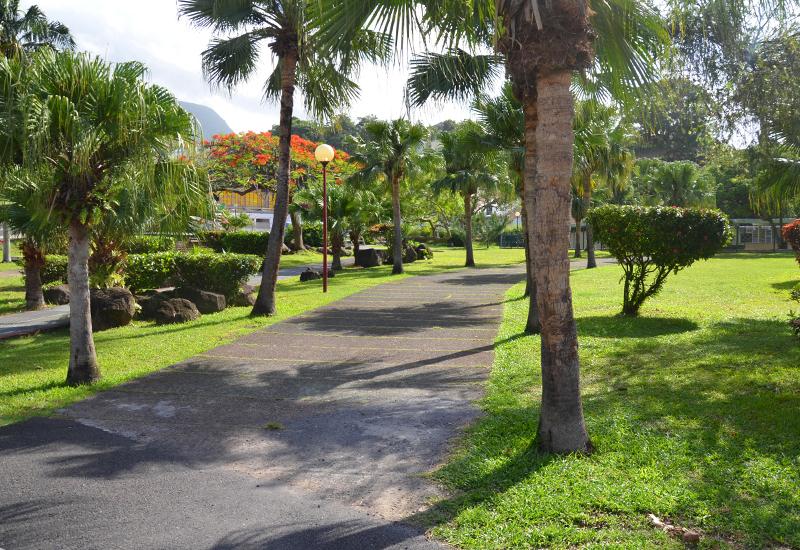 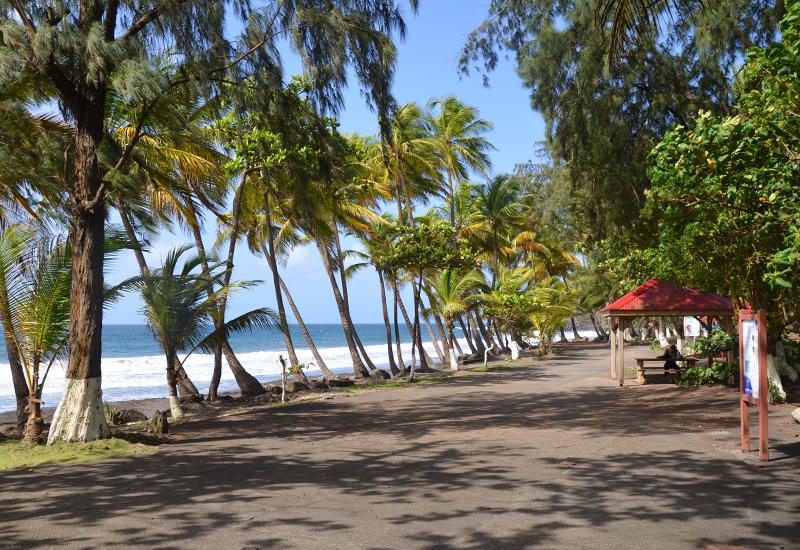