Like elsewhere in the Antilles, prior to the Common Era this region was inhabited by Pre-Columbian peoples from South America, who lived off the area’s mangrove, seashore, and forest resources. Capesterre shares a common history with its neighboring communes, Grand-Bourg and Saint-Louis.
Arawaks lived in the area around Les Galets in about 300 C.E., as evidenced by petroglyphs, some of which were discovered in the caves of Morne Rita (“Rita Hill”) in the northeastern part of the island. Classified as a historical monument, this site features several faces at the entrance to the cave, in a rare instance in the Guadeloupe archipelago of carving in limestone, a fragile substance. Unfortunately, human contact was causing the petroglyphs to deteriorate, so the site was closed to the public. In addition to manioc, cotton was grown by the Amerindians for use in making ropes, clothing, and hammocks. They named the island “Aulinagan” (“Land of Cotton”), and cotton continued to be grown here until just over a century ago. The Amerindians also made ceramic objects, pottery and tools. For fishing, they used Amerindian rafts called “pri-pri,” made from the wood of the trumpet tree (Cecropia peltata). Most of the vestiges of this era that have been discovered are on display at the Edgar Clerc Museum in Le Moule.
On November 3, 1493, during his second voyage to the Antilles, Christopher Columbus landed on the southwestern part of this island, which he named “Maria Galanda” for his flagship. In November of 1648, Governor Houël sent about fifty colonists to the island in an attempt to seize it from the British. This initial colony was devoted mainly to growing food and tobacco crops. After a period of peaceful cohabitation, the colonists began encountering resistance from Carib people living on the island of Dominica, who had been using Marie-Galante as a supply base. The Caribs were repulsed, and forced to retreat to bluffs on the northern part of the island, which were protected by a barrier of keys. They remained there until the signing of a peace treaty in 1660, when they were allowed to leave for the islands of Dominica and Saint Vincent.
With the introduction of sugar cane in around 1655, new colonists from India settled here to create the first sugar factories, which, at that time, resembled hangars equipped with small animal-powered mills for crushing the cane.
Although cotton and indigo plantations were widespread (vestiges of indigo plantations may still be seen near Les Galets), the history of Capesterre, like that of its neighbors, is dominated by sugar cane.
The colonists attempted to add sugar cane to their traditional crops using slave labor. Slaves already represented half the population of the island. However, their efforts were thwarted by incessant fighting between the French and the Dutch, then the British, who occupied the island several times between 1676, year of the first pillage by the Dutch fleet, and 1816.
The French were eventually successful in launching the sugar economy, which grew over the course of the 18th century to the detriment of other agricultural sectors: tobacco, cotton, coffee, and indigo. The parish of “cab-est-terre“ (a French naval expression meaning “land exposed to east winds”) was established in around 1703. At that time, the sugar industry was streamlining processes, pooling lands, and introducing the first windmill (in 1738). However, this upward trajectory was interrupted by slave revolts, British attacks, and natural disasters, bringing about the ruin of some of the smaller operators. Added to all this was growing competition from Saint-Domingue and Jamaica. Finally, the French Revolution, the initial abolition of slavery in 1794, and yet another British occupation, led to the mass emigration of the planters.
The 19th century was a time of accelerated decline for secondary crops. Sugar cane growers were able to take advantage of the protectionist policies of the Restoration government to revive their operations. The sugar economy reached its peak between 1818 and 1835, with the development of many windmills (the island had 105 at that time). The vestiges of many windmills are still present in Capesterre, among them Bézard Mill, which has been fully restored and is now owned by the commune.
However, the earthquake of 1843, growing competition from sugar beets, and the definitive abolition of slavery in 1848 brought to an end the first historical cycle of Marie-Galante’s sugar industry. The last autonomous sugar plantations finally collapsed during the worldwide sugar recession of the late 19th century. In 1914, World War I ushered in a short period of prosperity for the island’s rum and sugar operators, with 18 distilleries in 1931, as well as four sugar refineries. The Bernard central sugar processing plant in the commune of Capesterre remained in operation from 1881 to 1923. In 1959, the closing of the Robert factory and six distilleries triggered violent social unrest.
Capesterre, which is now part of a community of communes that includes Grand-Bourg and Saint-Louis, continues to rely on sugar cane as the basis of its economy, but has also begun developing tourism by promoting its sugar cane heritage, preserving its many natural sites, and building several fine hotels and guesthouses offering visitors a warm welcome.

The commune of Capesterre (approximately 47 km2) is located on the eastern Atlantic shore of Marie-Galante Island. It consists mostly of a hilly plateau dropping into a coastal plain with some significant changes in elevation. To the north, the land is characterized by steep cliffs and the island’s highest point, Morne Constant (204 meters); to the south, long yellow-sand beaches hug a scalloped coastline protected by a barrier of keys, with a lagoon of emerald waters; inland, the landscapes feature waving cane fields, hidden paths, and untouched wilderness, along with historic Amerindian sites. Such are the treasures that await visitors to Capesterre-de-Marie-Galante.
The charming town of Capesterre is a pleasant, peaceful village protected by a coral barrier reef. The port, tucked into the heart of town, is frequented by fishermen who gather there to sell their day’s catch:  parrotfish, sturgeon, sea bream, tuna, and frigate tuna. Visit Governor Félix Eboué Square to see Sainte-Anne church, designed by Ali Tur—architect dispatched to Guadeloupe by the French government following the devastating hurricane of 1928—and the remarkable Town Hall with its bust of the Governor guarding the entrance. Nearby, on Rue Gabriel Bade, stands the primary school, whose central structure, aligned with the square, was built in 1931 in pure Ali Tur style (be sure to note the tiling and cornices). Traveling north on the coast road toward Capharnaüm, enjoy exceptional views from atop cliffs formed by the gradual emergence of the island’s bedrock limestone, with caves marking the former level of the sea (for example, at Les Galeries and Morne Rita). Admire the intense blue of the ocean, glimpsed between columnar cacti and coastal frangipani. Hike “Sentier des Galeries” (“Gallery Trail”), which follows the shoreline above crashing surf. The road continues past “La Grotte de Morne Rita” (“Rita Hill Cave”), which is classified as a historic monument (not open to the public), toward two isolated beaches in the coves of Anse Taliseronde and Anse Feuillard, frequented by lovers of scuba diving—and tranquility. The “Côte Est” (“East Coast”) footpath runs along the shoreline of Les Galets (“Pebbles”) on the approach to the cove of Anse Piton, traversed by the “Barre de l'Ile” (the island’s fault scarp). This major offset in the earth’s surface rises to a height of 120 meters, marking an abrupt transition between the island’s “Bas au Nord” (northern lowlands) and cliff-lined shore. From Morne La Vierge (“Virgin Hill”), enjoy a magnificent view overlooking the town. Traveling north, highway D 201 crosses sugar-cane fields studded with mills (Bontemps-Rameau Mill, with the ruins of the former refinery, and Nesmond Mill) to arrive at the hamlet of Grand Case. The road to the right leads to Petite Place wind farm, commissioned in 1998. Take highway D 201 to the well-preserved Desruisseaux Mill. One kilometer further, a path may be accessed leading to Anse Piton cove. Highway D 202 descends to the bottom of the central valley, leading to the mill at Etang Noir (“Black Pond”). Bézard Mill is less than two kilometers away, a moving legacy of the island’s prestigious sugar cane past. Bézard Mill is the first mill in the French Antilles to have been restored to its original state. The departmental highway continues to the Bellevue Distillery, with its restored mill (tours and tastings available). Traveling toward Capesterre, highway D 202 joins Highway N9. Along the way, vendors offer traditional cane syrup, a local product obtained after boiling the cane juice, and local cane-syrup-based pastries (various cookies, “caca bœuf”—“beef cake”—syrup-based candies, etc.).
To the east on Robert Plateau, overlooking Grande Ravine between the communes of Grand-Bourg and Capesterre, eroded limestone forms basins and sinkholes, with many ponds surrounded by unique vegetation and wildlife, including the Molokoy freshwater turtle. The plateau’s shady slopes were once used for growing cacao, coffee, and vanilla crops. In the direction of Pichery (a hiking trail across the heights of Capesterre comes through here), arrive directly at Petite Anse beach and the D 203 coastal road, which leads to the center of town past magnificent La Ferrière and La Feuillère beaches, offering exceptional views of the turquoise ocean. The overgrown ruins of the former Bernard sugar plant are just a few hundred meters off the road. Chemin Bleu tourist maps of Guadeloupe and city street maps are available at the Office of Tourism of Grand-Bourg. 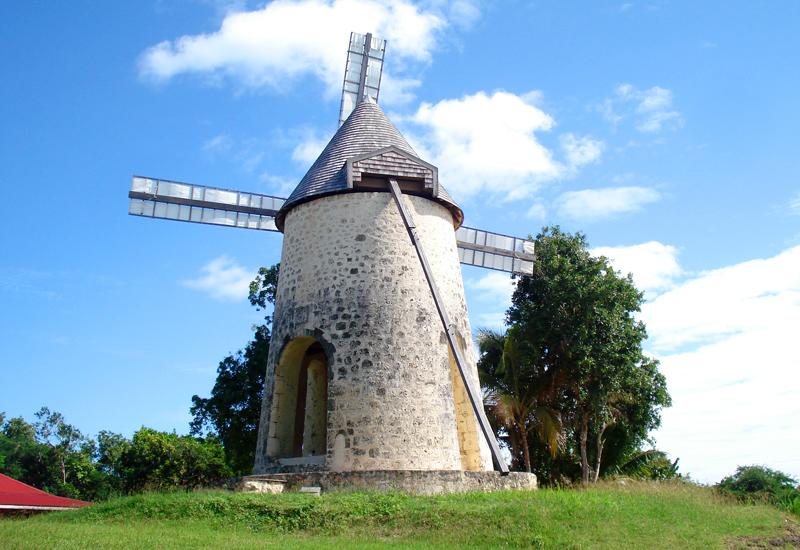 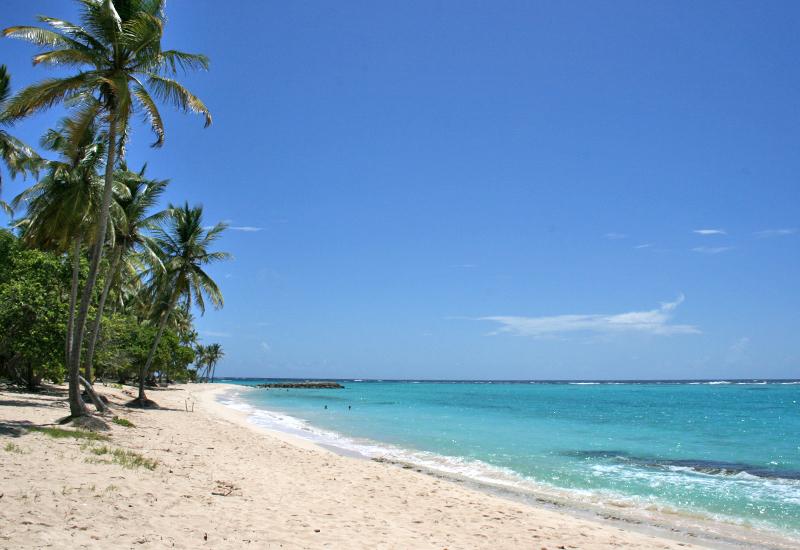 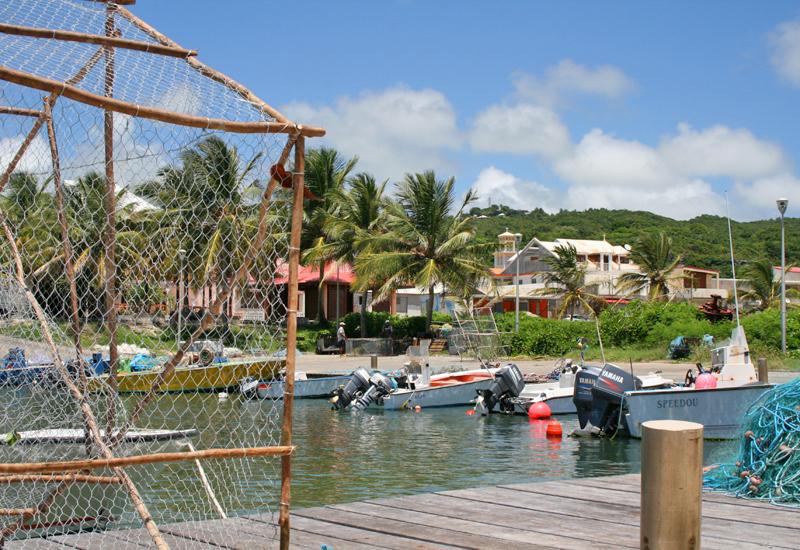 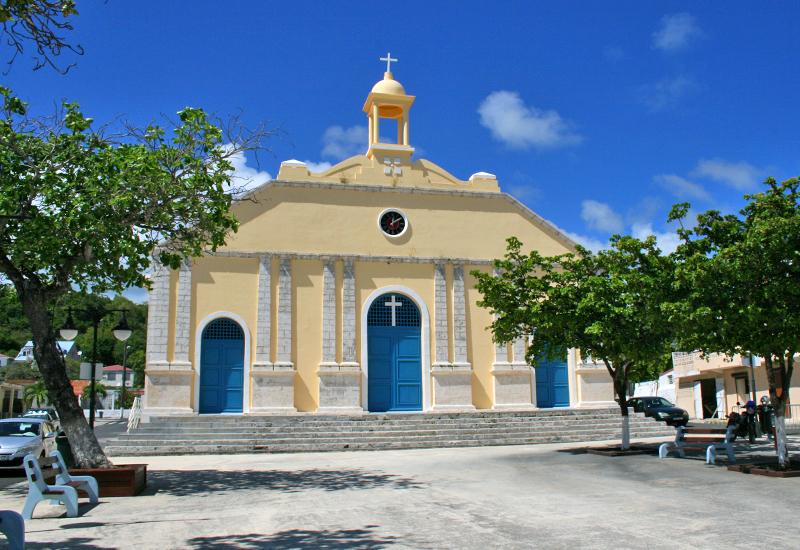