Until the 17th century, Terre-de-Bas was inhabited by Amerindians. Traces of their daily lives—pottery, ceramics, tools, conch-shell hatchets—have been found primarily in the area around Grande-Anse. In this fertile soil, these early inhabitants grew cotton (for making ropes, clothing, and hammocks) and manioc. They initially resisted the arrival of the Spaniards and Christopher Columbus, who landed on the archipelago in 1493 during his second voyage to the Americas—although his intention to settle on Les Saintes was quickly scrapped in favor of more abundant riches in the Greater Antilles. However, the Caribs eventually had to contend with the many intense battles fought between the French and British for control of the territory.
The first settlements in Les Saintes were established in 1648 at the behest of Governor Charles Houël, who created the Compagnie des Iles d'Amérique (Company of the American Islands). The French, led by Hazier du Buisson, set up camp primarily on Terre-de-Bas Island, which lent itself more to agriculture than its neighbor, Terre-de-Haut. The Caribs were definitively driven from their lands in 1658. The system of triangular trade that brought slaves to the islands accelerated the development of plantations in Guadeloupe. However, the battle between France and England for possession of Les Saintes continued and, in 1666, Du Lion and Desmeuriers formed an alliance with the Caribs of Dominica in order to dislodge the English enemy.
Guadeloupe, along with its dependency, Les Saintes, was annexed to the Kingdom of France in 1674, after which colonists began arriving in Terre-de-Bas. These new arrivals settled mainly around Grande-Anse, where there was safe anchorage between Pointe Noire, Cabrit Islet, and Pain de Sucre (“Sugar Loaf”) mountain. A few hundred inhabitants, the majority of whom originated in the Normandy and Charente regions of France, grew food crops here—peas, corn, and manioc—and traded with pirates and privateers, who came to the island to sell their booty and stock up on fresh supplies. A number of Dutch families came to settle here in this way.
However, Britain continued to be a threat. In 1691, the buccaneer governor of Saint-Domingue, Jean-Baptiste Ducasse, routed these tenacious adversaries from areas colonized by the French, driving them as far as Barbados at the southern tip of the Antilles arc. However, the British returned to reoccupy the archipelago between 1759 and 1763, year in which the Treaty of Paris was signed. In 1782, during a memorable naval battle fought in the Saintes channel, the French flotilla was destroyed by the Armada of Sir George Brydges Rodney, Vice-Admiral of England. The battle, which pitted 31 French ships against 36 British ones, has gone down in history as the “Battle of the Saintes.” It resulted in British domination of the territory for the next twenty years.
Despite all of this upheaval, the industrious spirit of the residents of Les Saintes continued unabated. The second half of the 18th century was a period of intense pottery manufacturing in Terre-de-Bas. Several factories were established, with the Fidelin plant standing out as the industry flagship. Located in Grand Baie, it employed nearly 150 people working to supply enough pottery to meet the high demand of the sugar plantations. The island’s economy continued to grow, with new crops appearing, such as indigo, coffee, and cacao. Today, vestiges of the plantations recall this period of prosperity, among them:  L’Etang, Leroy Prudent, Houëlche at Anse à Chaux (“Lime Cove”), and Lasserre at Case Cap. In 1802, the British gave way under the pressure of French offensives, only to seize Les Saintes again—albeit for the last time—in 1815. The following year, on 25 July 1816, Guadeloupe was returned to France under the terms of the Treaty of Venice.
The island’s first town, Petites-Anses (“Small Coves”), was founded in 1817 by Sainte-Marie Grizel, who commissioned the building of the first church on the island. A marble plaque at the cemetery commemorates the important role he played. The town of Grande-Anse appeared after the abolitions of slavery, because freed workers, from the pottery factories in particular, were mainly located in this part of the island. In addition to agriculture and pottery-making, fishing provided a source of livelihood for Terre-de-Bas residents. Those living in Petites-Anses had easy access to Guadeloupe’s capital, Basse-Terre; Grande-Anse fishermen communicated directly with Terre-de-Haut, which traded mainly with Trois-Rivières and Capesterre, the political capital of the district that encompassed Les Saintes.
Until the late 19th century, Terre-de-Bas and Terre-de-Haut were combined into a single administrative entity called Commune des Saintes. For practical reasons, then-mayor Jean-Pierre Lognos and the councilors of Terre-de-Bas decided to divide them into two distinct and independent communes. This became official on August 9, 1882. In the early 20th century, another economic activity would develop centered around West Indian Bay Tree plantations, give rise to the construction of several distilleries, including one at Grand Baie that still operates today. Further development was spurred by departmentalization (the establishment of Guadeloupe as an overseas department, rather than a colony, of France), the post-war economic boom, and modern transportation infrastructures. The fishing industry became more structured, and some initial attempts were made to establish a socially and environmentally responsible tourist industry, following the example of Terre-de-Haut, the idea being to showcase the island’s unspoiled natural setting and highlight its hospitality and agricultural and cultural traditions.

Terre-de-Bas may be accessed by boat from Trois-Rivières (30 minutes) or Basse-Terre (45 minutes). Some boats stop first in Terre-de-Haut before continuing on to Terre-de-Bas. Boats also leave for Terre-de-Bas from Terre-de-Haut (10 minutes).
Steep and mountainous, Terre-de-Bas (area 945 hectares) is larger than its neighbor, Terre-de-Haut. It consists of a central plateau with a small tropical forest culminating in Morne Abymes (elevation 293 meters). Terre-de Bas offers visitors many opportunities for wilderness hikes or relaxing at the beach. Its 1,269 residents earn their living primarily from fishing and agriculture, the soil here being considerably more fertile than that of its arid neighbor. Peaceful, quiet, and seldom crowded, Terre-de-Bas has preserved its authenticity, protected its natural heritage, and maintained its traditional way of life, all of which make it a particularly friendly and pleasant eco-tourist destination.
Visitors to the commune arrive at Anse des Mûriers (“Blackberry Bush Cove”) under the watchful gaze of the Virgin Mary and Neptune—statues perched on the headlands on either side of the cove—and the gun battery at Pointe du Fer à Cheval (“Horseshoe Point”).
From here, visitors set off to explore the island on foot or by motor vehicle (scooter, car, or minibus). Follow the shoreline along Grand Baie (or Anse Fidelin) to the former Fidelin pottery works, now classified as a historic monument. From here, enjoy a view that includes wind turbines and a superb panorama of the Virgin Islands and small nearby islands of Les Augustins, La Coche, and Grand Islet. Visit the interpretive Garden of Eloi Germain to discover the flora of Les Saintes and the virtues of the West Indian Bay Tree.
Continue on the shore road for a very pleasant drive to Petites-Anses. Nestled in a basin surrounded by mountains, this village is home to the commune’s administrative offices, Town Hall, post office, and schools. Stroll about the town and visit Saint-Nicolas Church, surrounded by its cemetery, a romantic setting of imposing tombs rising alongside modest graves of simple sand mounds outlined in lambi conch shells. Place de la Mairie (“Town Hall Square”) is also known as “9 August 1882 Square,” named for the date on which the autonomous commune of Terre-de-Bas was established. Continue next to the stadium for a short jaunt to Mare de Grand Trou (“Big Hole Pond”) to see iguanas, moorhens, and turtles. A steep street leads to Petite Anse Cove, with its boats and nets awaiting their next fishing expedition. This is a good place to see iguanas and catch some spectacular sunsets. The road further north winds through woods to Anse à Dos Cove, a peaceful haven offering an exceptional view of the ocean and Pointe Miquelon. Any of the many coves along the island’s shore lend themselves to sea excursions and underwater explorations, for the archipelago is home to a wide variety of coral-dwelling fish (parrotfish, coney, cardinal fish, trunkfish, grouper, yellowtail snapper, surgeonfish etc.), pelagic species (trevally, sea bream, tuna, thazard, etc.), lobster, crustaceans, mollusks, and shellfish, including the flavorful lambi. In the Saintes channel, it is not unusual to see cetaceans, humpback whales, sperm whales, and dolphins, which come to the warm waters of the Antilles to mate. Terre-de-Bas also boasts a number of well regarded diving spots, where several species of sea turtle may be seen, some of which are endemic to the Lesser Antilles.
Turning inland, the Trace du Morne (“Hill Trace”) begins at Petites-Anses. Hikers of this trail will see many West Indian Bay Trees, which grow in abundance here, and cross a tropical dryland forest to arrive at the foot of Morne Paquette (elevation 247 meters). From here hikers may return to the northern road—not open to motor vehicles at this point—and continue on foot to the township of Grande-Anse. Several other easy hikes begin at Grande-Anse, leading inland to the middle of the island, where hikers may enjoy spectacular views. Along the trail, other flora may be seen, in addition to the West Indian Bay Tree, that are typical of the dryland forests of the volcanic islands of the Antilles:  Turk’s Head cactus, and soapberry, “méku” (wild cherry), red gum, frangipani, and tamarind trees, the latter producing a fruit used to make an island specialty: the “limbé” artisanal fruit preserve. Grande-Anse is bordered by a yellow sand beach with coconut palms and features an exceptional view of Terre-de-Haut, Pain de Sucre mountain, and Cabrit Islet. Many local crafts are available here, including baskets and the famous "salakot" hat, with its characteristic pointed top. Traditionally made by men, this hat of fabric-covered bamboo fibers can still be seen on the heads of many fishermen. - www.terredebas.com. Chemin Bleu tourist maps of Guadeloupe and city street maps available at the Office of Tourism. 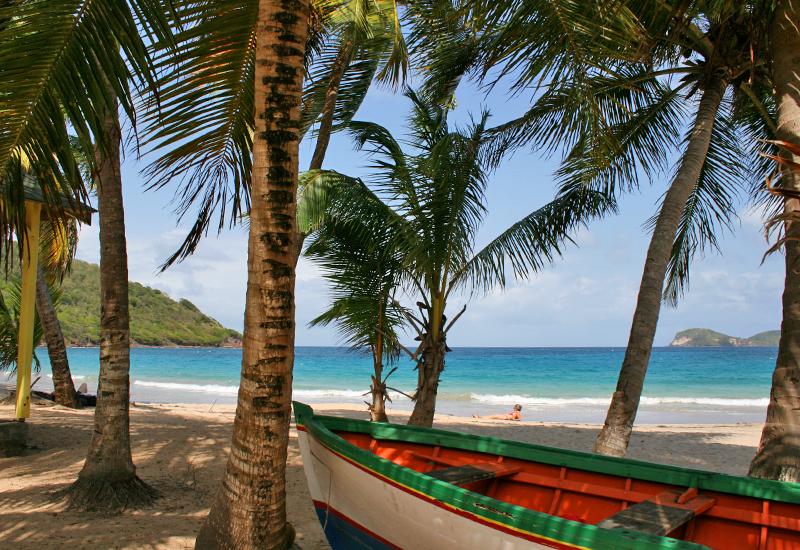 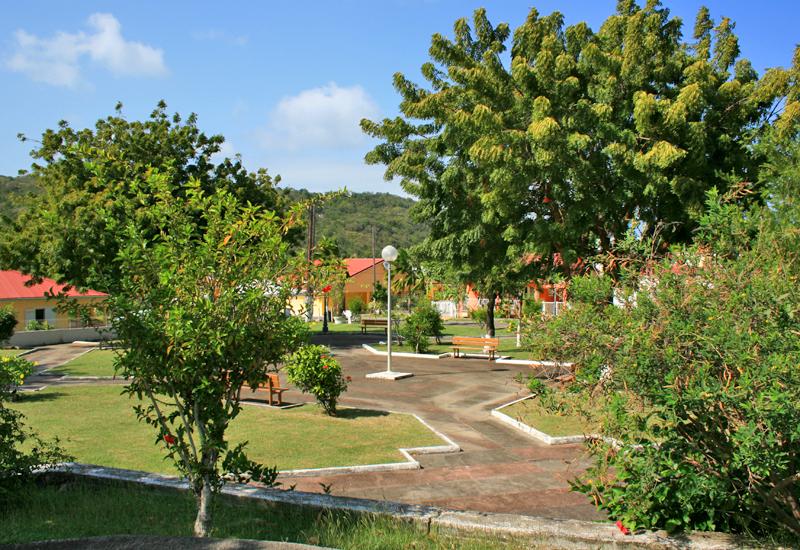 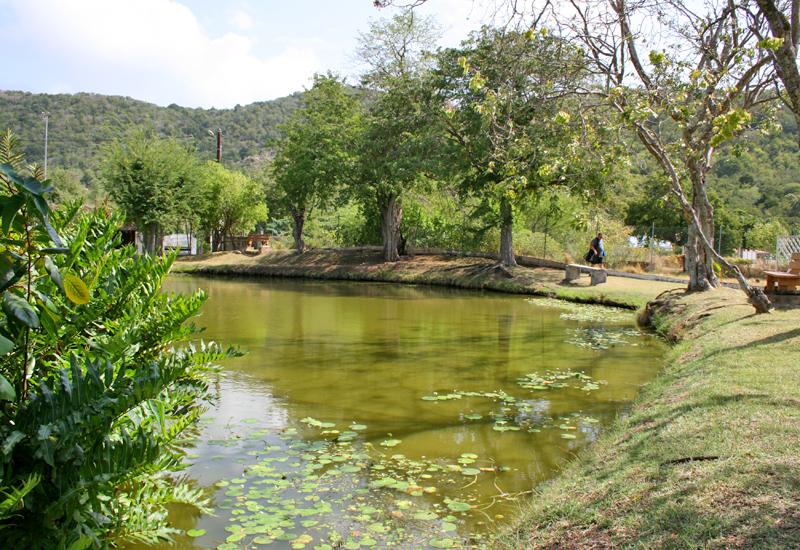 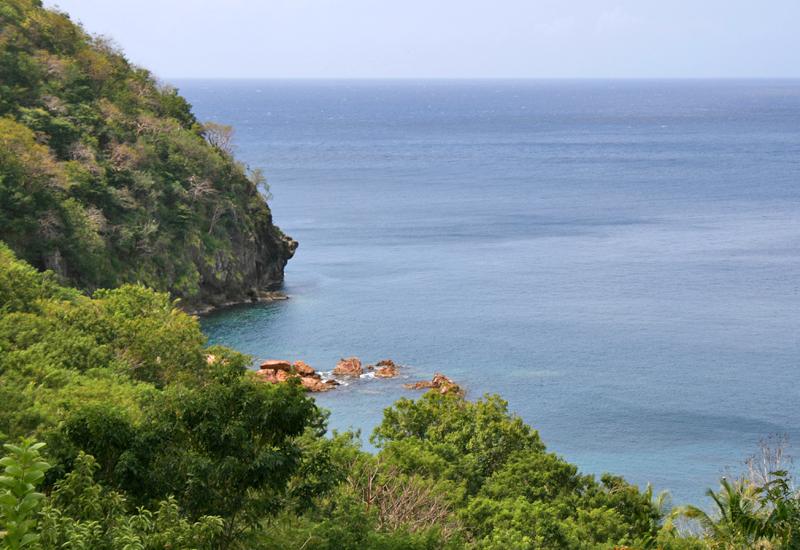