Vieux-Fort covers just over 7 sq. km and is located at Guadeloupe's southern tip, where the churning waters of the Les Saintes Passage meet up with the Caribbean Sea. A privileged witness to some of Guadeloupe's great historical moments, the region was first occupied by Amerindians who fished as well as kept large subsistence gardens in which they grew manioc behind coastal villages. Charles Lienard de l'Olive arrived with Jean du Plessis d'Ossonville and several hundred other colonists at Pointe-Allègre in 1635, but in early 1636 L'Olive decided to look for a more promising place to settle. After surveying the coast with his men, many of whom were weak, hungry and ill, he decided on this southern area of the island on the current site of today's Vieux-Fort, more specifically in the Mazarin neighborhood where there was already a village of Island Caribs. Ruins of the old village, called Petit Vieux Fort, are still visible and include a blockhouse that must have sheltered soldiers charged with protecting the inhabitants as well as vestiges of family cemeteries — such as the one belonging to the Dupuy family—since at the time it was colonial custom to be interred on one's own property. Things began well between the Indians and colonists, and even a kind of coexistence was established. However, following the death of Plessis, L'Olive began to systematically exterminate the indigenous population. He had a fort constructed near Anse Dupuy, not far from the Pointe. The small fort had a wooden palisade and was named Fort Royal in honor of Louis XIII. It housed several canons and had a chapel and subsistence gardens. Later, its name became Vieux-Fort because a new fort was constructed along the Galion shorelines in 1650 by Charles Houël, governor of Guadeloupe from 1643 to 1664. Eventually it was called Vieux-Fort l'Olive. The war ended in 1660 with the signing of a peace treaty at the Fort de Basse-Terre, granting the Caribs some small land parcels on the most barren areas of the island. From then on, Vieux-Fort, which also referred to Guadeloupe's southernmost point and the parish of this neighborhood, became a forward defensive position for protecting the south of the island from attacks as well as observing the coastlines. In March 1703 and upon orders from Codrington, the English arrived at Anse Dupuy. Despite a courageous fight by Vieux-Fort combatants, and even though the English incursion did not last long, Vieux-Fort l'Olive was destroyed. Its initial location remains unknown as the remains of the batteries, which are still visible today, date from the 18th and 19th centuries. Today the site is home to the "Centre de broderie et des arts textiles" (The Center for Embroidery and Textile Arts), which was created at the initiative of the Basse-Terre Chamber of Commerce and Industry. The Vieux-Fort neighborhood became part of the Basse-Terre municipality until 1730, when it gained autonomy. After several decades of back and forth between the English and the French, the 1763 Treaty of Paris returned Guadeloupe to the French, heralding a period of stability for the island. From an economic perspective, the massive arrival of slaves changed the structure of agriculture, shifting from a mosaic of small farms cultivated by the colonists to the creation of large estates. The remains of the sugar plantations, in particular the Blondeau plantation, where sugar cane, coffee and spices were grown over a vast area, can still be seen (former sugar processing plant, manioc factory, workers' houses and owner's house). Despite the many upheavals caused by Britain’s attempts to return (notably in 1759, during the seven-year war), this prosperity remained throughout the 19th century. The end of slavery (1848), competition (coffee from Brazil and Colombia, beetroot sugar vs. sugar), and the destruction caused by hurricanes eventually overwhelmed the struggling economy. Long isolated and turned only toward the sea, Vieux-Fort today is connected to Trois-Rivières by a road that joins the National Highway at Faubourg, and to Basse-Terre via Rivière Sens (Gourbeyre) by the coastal road built during the 1976 Soufrière volcanic eruption so that Basse-Terre can be evacuated in case of an emergency. The coastal cliffs and hillsides of the backcountry prevent this area from expanding and today it remains, with its 1,617 inhabitants, one of the smallest towns in Guadeloupe.  By focusing on its traditional activities like fishing and agriculture, Vieux-Fort spotlights its natural resources and heritage in order to directly participate in the island's dynamic tourism industry. Although a small town, Vieux-Fort has a wide range of tourist attractions and, with its ease of access to sites and ease of contact with the population, offers excellent convenience. Major attractions include the Center for Embroidery and Textile Arts, tours that engage visitors in the town’s evocative and varied past, the church and its belltower, the lighthouse, the town hall, the fishing harbor and the regions many walking trails on the slopes of the Caraïbes mountains. Nautical events like the traditional sailing regattas and the many shows organized by cultural and sports organizations lend this town an exceptionally friendly vibe.

Situated between the sea and the mountains and far away from the big highways, Vieux-Fort packs a small area with a wide variety of places to witness its natural beauty, history and heritage. This is a place to take one's time to stroll about and meet the residents of this peaceful area. Coming from Rivière Sens on the D6, follow the coastline and l'Anse Petite Fontaine, which is overhung with extraordinary weathered cliffs, before stopping at l’Anse Dupuy, a neighborhood that is charged with history as it was a large Amerindian village and the site of bloody battles between colonists and the Island Caribs. Today l’Anse Dupuy shelters a small port that locals use for fishing tuna and sea bream from their boats, the "saintoises." Originally these open sailboats, which were designed perfectly for the Caribbean Sea, were made out of wood (northern wood for the keel, mahogany for the planking and floor, and local pear for the frame and the prow) with a boom that is longer than the mast. Today, the motorized saintoise has replaced the traditional saintoise, but the latter, both in Vieux-Fort and throughout Guadeloupe, has benefitted recently from a revival with specially organized regattas. The most distinguished is the Tour de la Guadeloupe en Voile Traditionnelle (TGVT - Tour of Guadeloupe in Traditional Sailboats), a major event for the island.  Situated at the Pointe du Vieux-Fort, with its incredible view, are the remains of Fort l'Oliver, a first-hand witness to some great moments in Guadeloupe's history – including the 1980 establishment, near the old canons, of the Center for Embroidery and Textile Arts, where the region's skilled embroiderers work their magic. A small path leads to the base of the lighthouse that marks the entrance to the Basse-Terre bay. From here a panoramic view of the ocean and Les Saintes archipelago lies before you. An old battery with its canons keeps watch on the horizon. The county road running along the coast leads to the center of the village and to the school, the town hall, the church and its strange belltower, the stadium and the collection of shops and restaurants that all serve as gathering spots and create a lively scene. Enjoy the exceptional view from Launay Point. The walk continues along the coast — Pointe de Batterie, Pointe Comar, Pointe Violon — and overlooks the ocean up until the area called Blondeau, where the remains of the Blondeau Plantation, the largest in Vieux-Fort, can still be seen. It is possible to leave the D6 to make a loop toward the foothills of the Caraïbes Mountains, a charming little tour through the Derrière le Morne and Morne Caca areas with a return through Matouba. Vieux-Fort is the starting point for several walking trails through the Caraïbes Mountains, which are the oldest mountains on the island. They are over two million years old and climb to 687 meters. You can walk among the dry vegetation with its surprising hedge cactus as well as its orchids and numerous species of trees (Courbaril, Sandbox, Bois Lélé). Here you will discover magnificent landscapes and enjoy beautiful viewing points. Vieux-Port is also the point of departure, along the road to Matouba, for the Trace des Alizés, Guadeloupe's only long-distance hiking trail (GR). The approximately 65 km trail crosses Basse Terre from south to north and has a high level of difficulty. Walkers must be well-prepared as this hike takes about five days. It is advisable to use local guides and hike in groups. “Chemin Bleu” tourist maps and street plans of Guadeloupe are available from Tourist Offices. 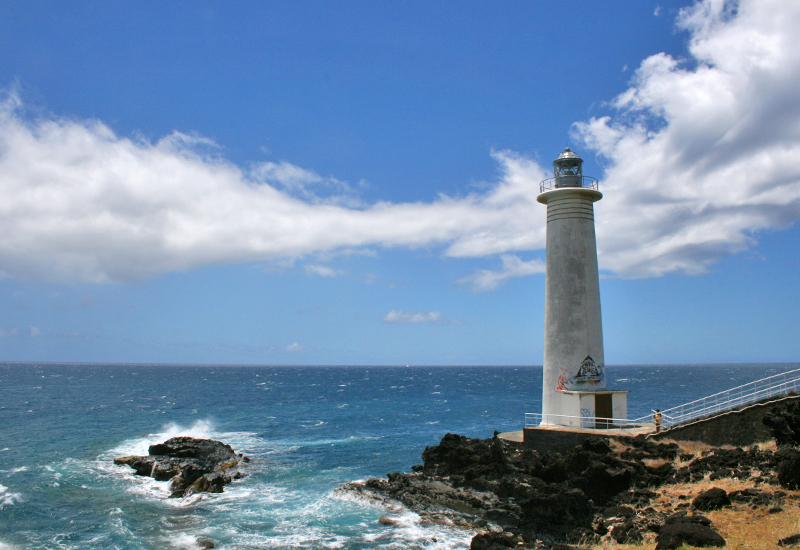 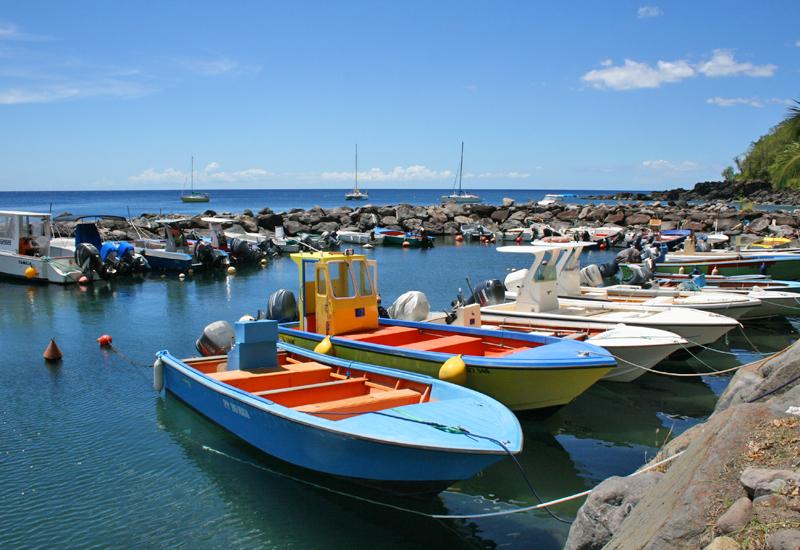 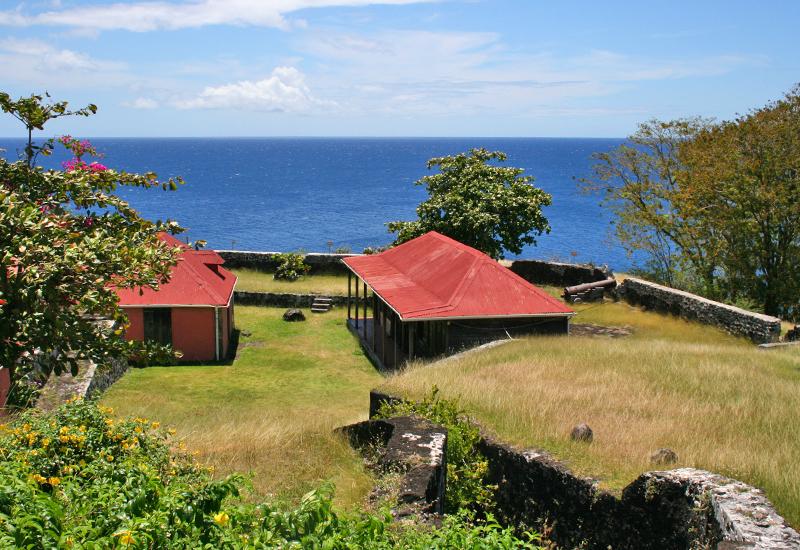 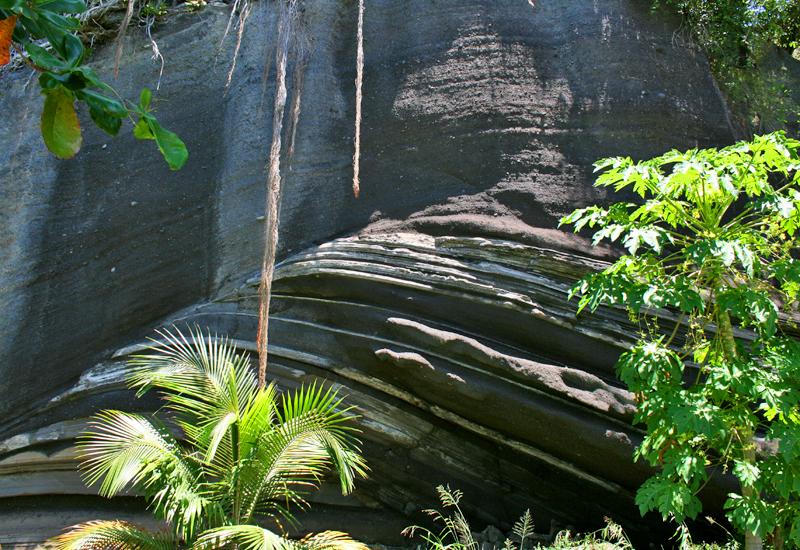