Archeological material discovered on the heights of Vieux-Habitants and carved rocks in the bed of the Du Plessis River indicate that Amerindians occupied this area from earliest years of the Common Era. Saint-Joseph parish was founded in 1636 by Nicola Suyllard, known as “La Ramée.” Colonists first settled along the shoreline, in the area known as the "cinquante pas du roi" (“fifty steps of the king”), located in a sheltered cove offering good anchorage. The rugged topography served as a natural defense, which was later reinforced by batteries. Proximity to the river resolved the crucial issue of freshwater, but created difficulties in the form of swamps and repeated flooding. The initial settlement consisted of only a few warehouses and huts around a modest wooden chapel erected by the Dominicans. The precariousness of life in the early days of colonization was such that the first colonists had to be content with basic shelters made of plant matter over a structure of wooden posts. Such huts were a blend of the temporary structures set up during French military campaigns, and the constructions of the Caribs. The tropical forest supplied choice raw materials:  hard woods,  prickly ash, etc.
The first colonists grew tobacco, later followed by cotton, indigo and, starting in the 1720s, coffee, a crop that was perfectly suited to the local climate. The coffee industry grew for more than a century before being replaced by annatto, an orange-red condiment derived from the seeds of the achiote shrub, used by Amerindians as body paint and by the colonists for dye. Plantations were established on the heights of the commune, where it is still possible to see remnants of this rich past today at the coffee plantations of Morandais, La Grivelière, Getz, Loiseau, Domaine de Vanibel, etc. Master’s houses were mostly single-story dwellings, although two-story houses, known as “hautes-et-basses” (“upstairs and downstairs”) began appearing in the late 18th century. However, natural disasters—hurricanes and earthquakes—resulted in the destruction of many of these structures, which had to be rebuilt several times. Most of the documented wooden master’s houses date from the second half of the 19th and beginning of the 20th centuries. However, a number of stone structures were built during the second half of the 18th and first quarter of the 19th centuries, when galleries became a common feature of Creole architecture (see a prime example, built in 1916, at the Guilliod Plantation). Plantations, like all agricultural concerns, even the smallest, always included several buildings in addition to the master’s house. Kitchens, which were separate from the master’s residence, often had walled vegetable gardens and sometimes a bread oven. Water was stored in terracotta jars called “daubannes” (due to their origin in France’s d'Aubagne region) that were often kept in “cases à eau” ("water houses”). "Cases à farine" (“flour houses”) were used to store the materials needed to make manioc, such as the milling apparatus and “platines” (large hot plates). Such plantations also owned seaside warehouses for storing merchandise prior to shipping by sea. Up until the abolition of slavery, the town was populated primarily by people of mixed-race who, after 1848, were joined by freed slaves.
In addition to working the land, the colonists had to hastily prepare to fend off attacks, primarily from the British. Although the many coves along the coast gave ships safe anchorage in foul weather and served as a refuge from enemy attacks, the land along the coast, which had not been the object of land grants to planters, had to be fortified. Batteries were built, preferably on rocky promontories. Unlike forts, however, these were not of any use during a siege, since they generally consisted of only a stone parapet wall and a firing platform for the cannon. The strategic port of Anse à la Barque was the theater of ferocious combat with the British several times (1691, 1703, 1746, and 1809). Until 1922, the commune’s only means of communication with the outside world was via marine transport from this cove.
Today the commune of Vieux-Habitants is home to 7,700 residents, known as “Habissois.” The basis of the economy is still primarily agriculture. However, with its proximity to La Soufrière Volcano and Guadeloupe’s National Park, the commune is also focusing on sustainable tourism, involving all of its economic actors and showcasing its natural and historic heritage, by promoting the Grande River Valley and Beaugendre River; improving the coves of Val de l’Orge, Marigot and La Barque; selling local products; and promoting its plantations, such as Grivelière.

The commune of Vieux-Habitants extends from the island’s central mountain range to the coastline between Anse à la Barque and Anse Colas. It boasts several rivers. Its hidden natural and historical treasures may be found tucked away in the mountains or nestled in the bottom of riverbeds, testimonies to a people who, over the centuries, have demonstrated both their tenacity and creativity time and time again.
Your fascinating tour begins at the natural cove of Anse à la Barque(“Boat Cove”), a site that has managed to preserve both its historic (the batteries) and ecological significance. Behind the coconut palm grove, note the old basins from the indigo plant. Traveling south, National Highway N2 passes through Marigot. The “Maison de la Côte sous le Vent“ (“House of the Leeward Coast”) may be seen next to the road, offering information from Guadeloupe National Park. Higher up, the valleys of Beaugendre and Grande Rivière (Grand River) offer fabulous wilderness hiking and wonderful opportunities for invigorating swims. Travel two kilometers further to L'Etang, where there is a beach with shade structures for picnicking. To the left, the road toward Belair and Géry will take you to Getz, a 1780 coffee plantation featuring buildings made of local wood and several items of interest:  a “glacis” (coffee-drying area), basin for washing coffee beans, etc. Just prior to entering the town of Vieux-Habitants, in the hamlet known as Le Bouchu, the Musée du Café (Coffee Museum) stands to your right. This is where the famous Chaulet coffee is roasted. Guided tours and artisanal chocolate factory.
Don’t miss Saint-Joseph Church, one of the oldest churches in Guadeloupe. Places of worship in the Côte-sous-le-Vent (Leeward Coast) region were initially nothing more than simple wooden structures with straw roofs. During the second half of the 17th century and throughout the 18th, these were replaced by masonry structures. This church is located at the site of the first chapel erected by the Dominican friars in 1636. Its magnificent porch of volcanic rock was carved by Limousin stonemasons, and features the traditional emblem of the Order of Capuchins:  a depiction of an incident in the life of Saint Francis of Assisi; in this instance, the day Jesus removed his arm from the cross to return the embrace of Saint Francis. Inside, note the beautiful gold-plated ecclesiastical objects and the commemorative chapel. Nearby Simaho Beach is a pleasant place to relax.
Departmental Highway D27 follows the Grande River Valley, considered one of the most beautiful valleys in the archipelago, with lovely landscapes on each of its slopes. Many endemic species live here, including the “toto bois” (also known as the “Pic de Guadeloupe,” or Guadeloupe Woodpecker). This unspoiled area is an exceptional natural preserve.
Arriving in Grande Rivière, stop at Loiseau, an early 20th century coffee planation. This five-hectare estate features a colonial house and coffee processing plant. Continue to the top of the road to visit the Grivelière Plantation, classified as a historical monument in 1987. It features several buildings that have been completely restored. Departmental Highway D13 leads to Domaine de Vanibel, a charming estate where coffee, vanilla, and bananas are grown. Guided tours available. Continue on National Highway N2 toward Baillif. Stop at Pointe du Corps de Garde (“Guardhouse Point”) to explore the vestiges of an old battery still quietly keeping watch. Next, take a break at Plage de Rocroy, a beautiful tree-lined fine sand beach with shade structures, or stop in the hamlet of Val de l'Orge to enjoy a panoramic view of the cove. Anse Colas, on the boundary between the communes of Vieux-Habitants and Baillif, is where the Du Plessis River empties into the ocean. It features extraordinary carved rocks from the Amerindian era. Chemin Bleu tourist maps of Guadeloupe and city street maps are available at the Office of Tourism. 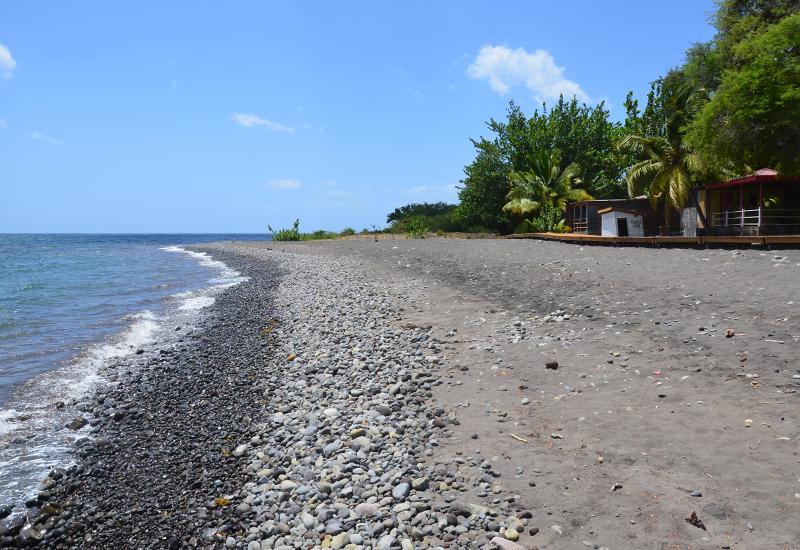 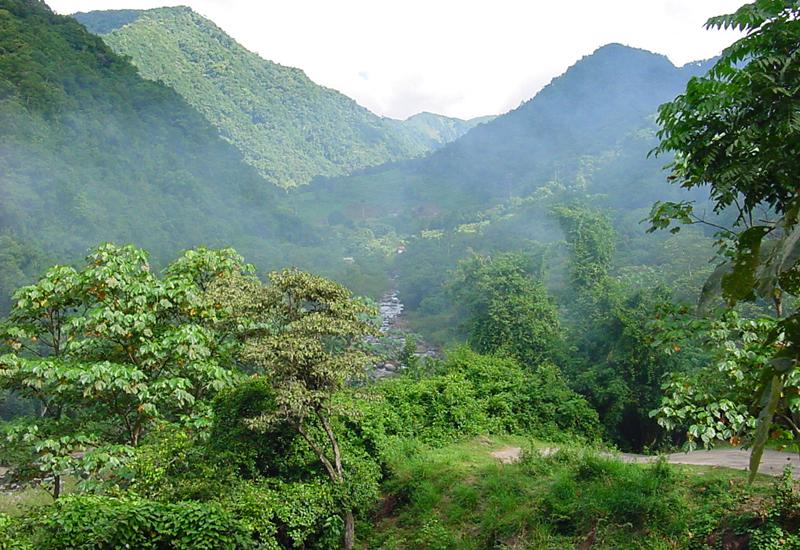 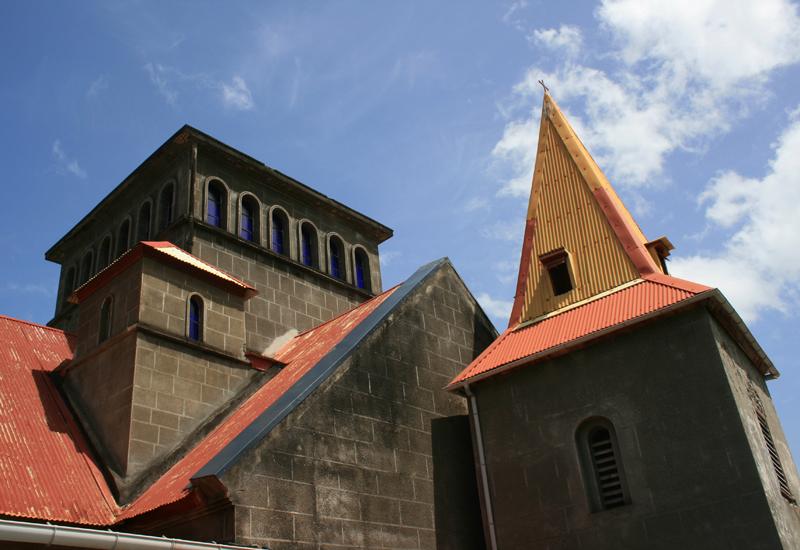 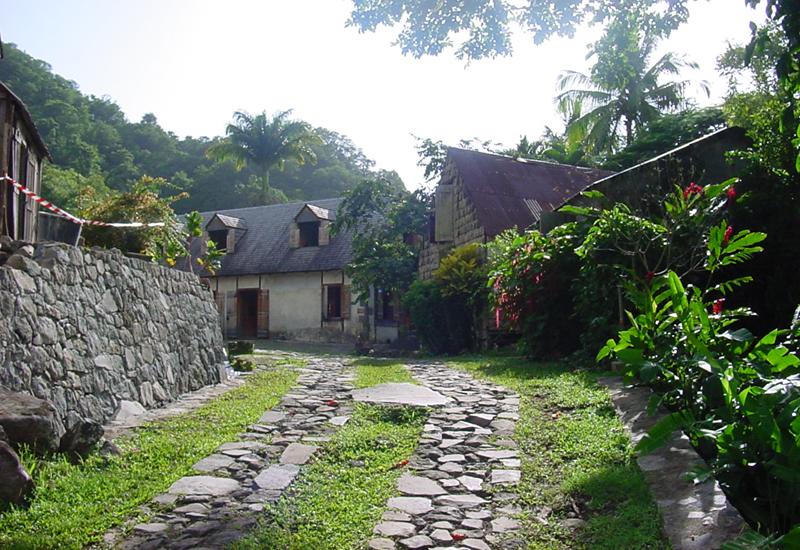