Archeological digs at a number of locations (including the exceptional Anse à la Gourde site) indicate that the area now known as Saint-François was inhabited as early as 1,000 B.C.E. by pre-Amerindian populations, and was continuously occupied up until the island’s arrival by Christopher Columbus in 1493 and the arrival of the first French colonists in 1635. Initially known as “Paroisse des Châteaux” (“Castle Parish”), the parish of Saint-François was established in 1638.
Saint Francis of Assisi was chosen as the parish’s patron saint by Capuchin friars. In 1797, at the suggestion of then-governor Victor Hugues, the parish temporarily adopted the name “Egalité” (“Equality”). At the time, the settlement focused primarily on growing cotton. The areas around Pointe des Châteaux and Anse à la Barque grew manioc and castor bean plants, and the marshlands east of town were dedicated to salt production (hence the name “Salines“ given to these watery areas that flood at high tide). The development of the sugar cane industry in the early 18th century gave rise to large estates that relied on slave labor, and the conversion of the economy to sugar production; by 1820, the parish had 36 sugar plantations and 41 mills. In the wake of the abolition of slavery (1848), immigrants began arriving in large numbers from India in 1854. Today, the rural landscape of Saint-François is dotted with Hindu chapels or temples, indicated by flagpoles flying the triangular Saffron Flag.
Up until 1974, the life of the commune revolved around sugar factories in Courcelles, Sainte-Marie, and Sainte-Marthe. Devastated by the hurricane of 1928, the town of Saint-François and its surroundings were ravaged again by Hurricane Hugo in 1989.
Although fishing and vegetable farming still account for a significant share of the local economy, tourism is now the commune’s primary economic driver.
Spurred by high levels of tourism and population growth, Saint-François has taken major steps to modernize facilities in its populated areas, and has made sustainable development a focus of its urban and rural planning policies.
The marina has been restructured around pleasure boating; the passenger port is now a point of departure for excursions to neighboring islands; and maritime activities have been completely restructured, with improvements to the fishing port. Environmental protections are being implemented in the Pointe des Châteaux sector and on both the western and northern shorelines. Saint-François boasts athletic facilities throughout the commune, as well as a municipal golf course, an airfield, and a water sports center.
The growing popularity of the many water sport events held in Saint-François is proof of local enthusiasm for athletics. The commune also offers numerous other opportunities for relaxing and having fun. With a casino, discotheques, and the availability of many concerts and performances, visitors to the commune will never be at a loss for ways to spend a pleasant evening out.
Saint-François has adopted an ambitious cultural and athletic policy for its populated areas. The municipal Office de la Culture, des Sports et des Loisirs (“Office of Culture, Sports and Recreation, or OMCSL) organizes regular events (music and dance workshops, theater, competitions, continuing education courses, and more), and provides support to those who wish to organize cultural projects or events. Today the town has a strong network of very active and engaged organizations that have made it an outstanding cultural and artistic destination.
In enhancing Saint-François’ attractiveness to tourists, the Office of Tourism and local business people have made a concerted effort to develop local activities, including a yearlong schedule of varied, homegrown events open to the public:  the Fête de Pombiray (“Pombiray Festival”) in January, a night parade of Carnaval-related groups that takes place on “Lundi Gras” (the Monday before Mardi Gras); the Fête du Poisson et de la Mer (“Fish and Ocean Festival”), in April; the Fête du Nautisme (“Water Sports Festival”) in May; the traditional gathering at the “Monument aux Esclaves” (“Slave Memorial”) in Bois-de-Vipart to commemorate the abolition of slavery, on May 26; a single-handed sailing race, in June; the Pointe des Châteaux and Bois-de-Vipart Festival, in July; the Fête des Marins (“Sailors’ Festival”), in August; the “Fête Patronale” (Local Heritage Festival); the Fête de Raisins Clairs (“White Grape Festival”); the Miss Saint-François pageant, in October; the Fête de Bragelogne festival, in November; the Christmas Village, a joyous celebration of children and elders, and Bord de Mer en Fête ( “Shoreline Festival”), in December.

Located at the easternmost point of Grande-Terre, the commune of Saint-François (area 6,100 hectares) has a warm, dry climate, constantly buffeted by trade winds. Geographically, it is quite distinct.
The western and northwestern parts of the commune are characterized by farmlands once devoted to intensive sugar-growing. Small beaches line the coast. These, along with nineteen mills, the vestiges of former sugar plantations, and fabulous inland hiking trails crossing the renowned Pointe des Châteaux, attract nearly 100,000 tourists to Saint-François each year. The “Grand Site” operation, dedicated to preserving the natural heritage of Pointe des Châteaux since 1999, and the improvement of recreational infrastructures (golf course, water sports center) have contributed to making Saint-François one of the most visited communes on the Guadeloupe islands.
The jewel in the crown of Saint-François tourism is indeed Pointe des Châteaux. Recognized as an important site by ministerial decree on May 27, 1997, it receives nearly 500,000 visitors a year. An improvement program has been implemented that will allow visitors to explore all of the area’s natural wonders under conditions that will preserve the integrity, vulnerable species, traditional activities, and archeological finds of this unique site. The program provides mechanisms for welcoming visitors, ensuring public safety, and maintaining interpretive trails. The new approach not only better showcases this exceptional environment, but also introduces the concept of sustainable development into site management, allowing activities that add to the local economy. Visitors may enjoy the area in a number of ways:  quad bike and dune buggy riding on dirt tracks near the coast, horseback riding on the beach, hiking, mountain biking, or—for those who prefer to take to the air—skydiving, powered-paragliding, and flying over neighboring islands on a twin-engine aircraft.
With its 150-hectare turquoise blue lagoon and 35 kilometers of coastline, Saint-François is ideal for water sports. The commune has developed quality infrastructures in recent years to encourage the development of such activities, including a water sports center, open to all, that was awarded the France Station Nautique (“French Nautical Resort”) label. Activities supported by the center include:  scuba-diving, canoeing, kayaking, sailing (boats ranging from small Optimists to yachts), traditional sailing (wooden two-sail dinghies), wind-surfing, wave-surfing, kite-surfing, jet-skiing, and big-game fishing.
The town, in cooperation with the water sports center, has undertaken many initiatives to promote these sports, with numerous events aimed at introducing the public to water recreation:  the “12 Hours on the Lagoon” windsurfing competition during the “Fête du Poisson et de la Mer” (“Fish and Ocean Festival”), the Guadeloupe Fun-Boarding Championship, the “Tour de Guadeloupe” of Traditional Sailing competition, and more.
Saint-François offers numerous places to shop:  in the area of Kennedy Avenue and Avenue de l’Europe; the galleria near the port; the boutiques of “Les Comptoirs de Saint-François”; and various locations around the town’s periphery. The booths of local produce markets feature mountains of brightly colored fruit, fragrant spices, punches, cacao, fruit preserves, local crafts, and smiling vendors. Residents of Saint-François know how to work with their hands:  souvenir shops sell braided palm fronds, banana leaf dolls, carved gourds and coconut shells, lacework, madras fabric, and magnificent bouquets of tropical flowers. From spacious luxury hotels to guesthouses tucked away in the country, Saint-François offers a diverse selection of comfortable lodgings. Visitors will also be delighted by the number of restaurants and variety of cuisines on offer:  seafood specialties, lobster, lambi, and many varieties of fresh fish; Creole cuisine, Indian cuisine, exotic dishes, and traditional French cuisine. - villedesaintfrancois.fr - www.destination-stfrancois.com. Chemin Bleu tourist maps of Guadeloupe and city street maps are available at the Office of Tourism. 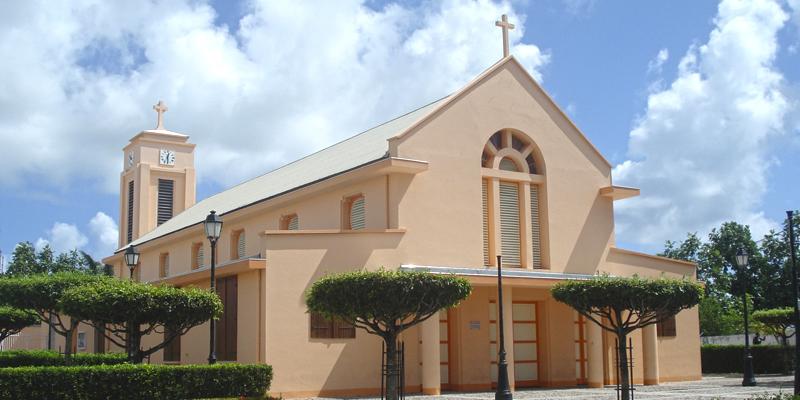 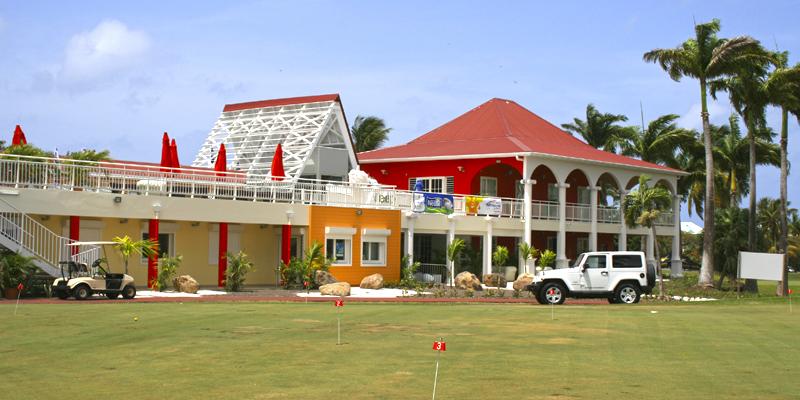 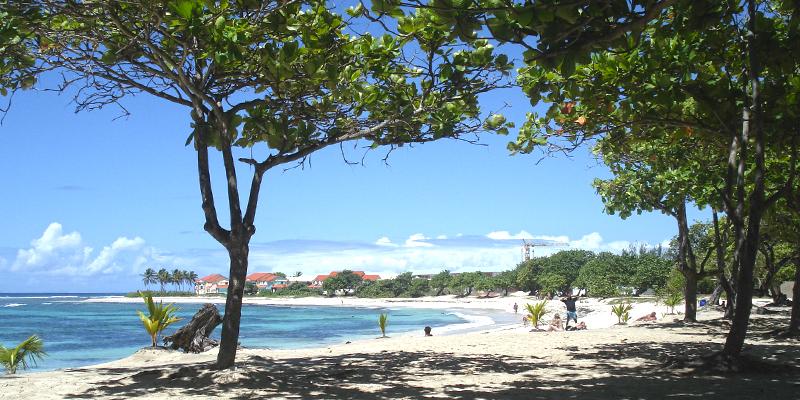 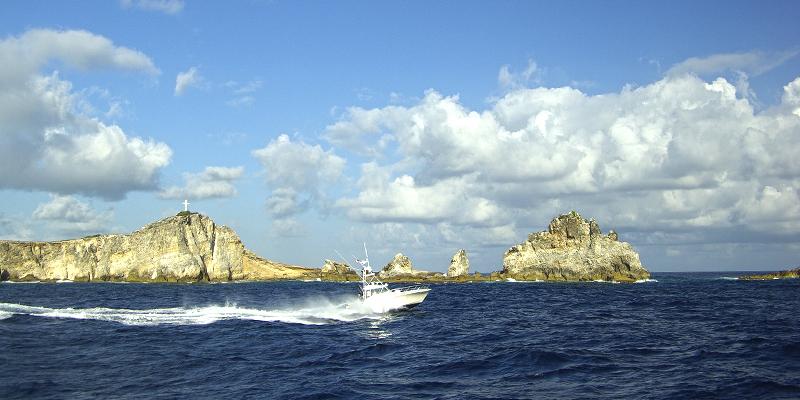