Deshaies is a densely wooded commune on the Caribbean Sea whose uniqueness is immediately apparent to visitors, with a scalloped shoreline, magnificent coves, and the deepest, most naturally protected bay on the entire Caribbean coast. This exceptionally sheltered bay is what gives the commune its name, “haye” meaning coastal haven, a place where ships can land. Attractive to seafarers of every sort, this natural harbor was for centuries the haven of privateers, buccaneers, and vessels whose intentions were primarily hostile, although they became much more commercial after the island’s political stabilization. The cove’s exceptional qualities were not lost on Christopher Columbus, who is said to have landed here to replenish fresh water supplies during his voyage to the islands in 1493.
During the 17th century, the commune was part of the parish of Grand-Cul-de-Sac; bordered to the south by the Colas River and to the north by the Coing River, it extended from what is now known as the Pointe-Noire commune all the way to Baie-Mahault. In 1635, a French colonizing expedition led by Charles Liénard sieur de l’Olive and naval captain Jean Duplessis landed north of here at Point Allègre. Gradually, colonists found their way to this part of the coast to settle its mostly deserted, wooded terrain. Here they cultivated the land and lived off the sea’s bounty, establishing several settlements, one of the earliest being in the Grande Anse (“Grande Cove”) area, which eventually became the commune’s seat of government and religious center. By 1671, Deshaies was home to 24 plantations, the best known being Grande Anse, Guyonneau, and, especially, the extensive plantation owned by the Potherie family at the location of the present-day town. However, unlike in communes further north, Deshaies’ cane fields grew alongside vanilla, coffee, and cacao crops. However, the sugar recession of 1686 resulted in a generalized economic slump, as the local population contended with frequent attacks by the British and harassment by pirates prowling the nearby waters, causing serious disruption in the region’s activities. Local habitants turned to food crops (manioc, peas, potatoes, yams, millet, and tobacco) and small-scale livestock operations.
In 1722, this population center began being referred to as the Quartier du Gros Morne (“Big Hill Quarter”), which included the sectors of Ferry—which already had its own chapel—Des Hayes, Grande Anse, and La Perle. It was not until 1730 that a town was established in the cove of Des Hayes. Despite this, the area remained isolated and, in the face of continuing harassment from enemies of various sorts (the British, privateers, runaway slaves), militias were formed and defensive battlements built at Gros Morne, Battery Point, and Point Ferry. In 1794, the island was re-taken by Brigadier General Victor Hugues. The initial abolition of slavery occurred soon thereafter. Unlike in the rest of Guadeloupe, the political and social upheaval attending this event was in keeping with the sensibilities of the commune, whose mayor, André Duhalde Detcheberry, had sided with the new Revolutionary Convention regime in 1792, when the rest of Guadeloupe was still in the hands of counter-revolutionary royalists.
The Napoleonic era of the early 19th century proved detrimental to Deshaies’ development. Although Deshaies’ location was a strategic one, it was far from the seat of government in Basse-Terre. The commune was subjected to repeated attacks by the British in 1803, and was pillaged in May of 1804, leading to a mass exodus of the population, which refused to accept foreign occupation. Malarial fever and other epidemics added to its woes. In 1822, fewer than 500 souls remained here. The definitive abolition of slavery in 1848 brought radical changes to society. Tensions were high between the commune’s owners and workers, and conflicts were sufficiently violent to unsettle] the central government. The commune was agitated, different, and geographically isolated. Until World War II, its economy was based almost exclusively on maritime activities. It became known for its locally produced charcoal, which it sent mainly to Basse-Terre by traditional sailing dinghy, and as a hotbed of dissidence against Governor Sorin, who instituted a compulsory work program in Guadeloupe between 1940 and 1943 under the Vichy regime.
These factors combined predisposed Deshaies to maritime occupations. Various fishing techniques, including the use of seine (or dip) nets and fish traps, are still practiced in Deshaies, Grande Anse and Ferry, along with dragnet fishing for tuna and marlin. It was not until 1957 that national highway N2 was inaugurated, linking Deshaies to both its natural inland surroundings and the central government, bringing to an end its isolation from the island’s road network. The opening of the road encouraged authorities and locals alike to devise opportunities for developing those of the commune’s resources that would best secure its future. In addition to the traditional activities of fishing and agriculture, a tourist economy was developed, focused more specifically on eco-tourism and pleasure boating. The ideally situated Fort Royal Hotel was built in the 1960s, as the headquarters of the Club Med resort. In 2008, it became the Langley Resort Fort Royal hotel, and has served as a base for the development of numerous complementary activities (water sports, sport fishing excursions, hiking, tours, etc.), additional guest accommodations, and restaurants. These and other efforts spearheaded by the mayor’s office aimed at environmental preservation have made Deshaies a highly regarded tourist destination. Deshaies, current population 4,356, is a member of the association of municipalities of Northern Basse Terre. It continues to develop the infrastructures necessary to the cultural, athletic, and economic vitality of its residents. It regularly hosts sailing and athletic events, stimulates cultural activities across its territory, and promotes its artisans. In addition, it welcomes cruise boats, making Deshaies a global tourist destination.

Tucked between mountain and sea, Deshaies boasts a string of beautiful beaches and coves, some of which are at the mouth of valleys bathed by rivers. The commune’s traditional economy was based on fishing, agriculture (coffee, vanilla, cacao, manioc, and cotton) and artisanal crafts. Its coastline, characterized by low bluffs, runs for a dozen kilometers. Mangrove areas feature numerous ponds, including Grand Etang (“Big Pond”), Petit Bas Vent (“Little Low Wind”), Cassis (“Currant”), Rate (“Rat”), Ziotte, and Grande Anse (“Grand Cove”). The tour begins at the island’s most ancient geological outcropping, Morne Fraîcheur (“Cool Hill”) at the border with Sainte-Rose, the commune’s northernmost point. This part of the island features vegetation typical to ocean-side bluffs, including manchineel and raisinier (“sea grape”) trees. As visitors travel south on national highway N2, the commune’s pelagic charms unfold, first at intimate Anse de Tillet beach, followed by a magnificent panorama that includes Anse du Grand Bas Vent (“Big Low-Wind Cove”), the Caribbean Sea, and Pointe du Petit Bas-Vent (“Little Low-Wind Point”), where the tourist hotel built on the site of the former Fort Royal proudly stands. The road then begins to climb inland to the heights, offering a panoramic view of Kahouanne islet. In clear weather, Monserrat Island can be seen on the horizon.
Pass two small residential areas scattered across their coves of the same name: La Perle (“Pearl”) and Rifflet. An alluring setting of red sand and emerald sea, Pearl Beach lives up to its name. This is the starting point for the coastal trail that leads southward to Gros Morne (“Big Hill”). Walk among xerophilous forest species such acomat (“buttress root”) and ebony trees, orchids, and cacti. Royal terns and brown pelicans perch on the reefs. Visitors are likely to encounter fishermen, farmers, and wood craftsmen during the hike.
The small seaside village of Rifflet carries on the island’s manioc tradition, and those in the know never miss the Sunday cassava tasting. Highway N 2 follows the coast past Le Breton Point. Enjoy the exceptional overlook at the foot of Morne Gadet, with Grande Anse, one of the island’s finest beaches, stretching out below. Houses to the north indicate the Ziotte Quarter. Take departmental highway D18 to the Caféière (“Coffee Plantation”) sector, then follow a road leading to the right in the direction of Montagne aux Orchidées (“Orchid Mountain”). One kilometer up, a stela marks the location of the 1962 crash of a Boeing jet. A trail of the same name (“Trace du Boeing”) starts here. Return to highway N2 and continue south in the shadow of Gros Morne (“Big Hill”), a peninsula rising to an elevation of 206 meters (footpath available), before reaching the village of Deshaies. Tucked into its cove between Gros Morne and Morne aux Fous (“Madman Hill”), this sheltered harbor is a landing for cruise ships, with a picturesque village of lively streets and Creole houses nestled between sea and forest that welcomes visitors with open arms. Stroll through the town at its quiet pace to discover vestiges of its history and heritage:  Saint-Pierre and Saint-Paul Church, symbol of unity for local residents; the fascinating megalith sculpture entitled “The Observer” in front of the library; the Némorin family bread oven, which dates from the 1940s; the Pont Rouge (“Red Bridge”); boutiques; and, of course, the port. This calm and sheltered port serves as a supply point for all seafarers, and provides anchorage for fishing dinghies, sea-fishing boats, and pleasure boats. Gorgeous sunsets guaranteed. From the port, Battery Point can be seen, a former strategic defense, with cannons and powder magazine (footpath available). Next, continue toward Pointe-Noire. In Viller, visit the botanical garden, with its magnificent flowers and animal park. Along the road, a marble marker bears the inscription “Côte-sous-le-vent reconnaissante” (“In gratitude, Côte-sous-le-vent”), commemorating 1957, the year when the national highway was finally completed between Deshaies and Pointe-Noire. Explore the Deshaies heights on a small mountain road leading to Morne Bois d’Inde (“Indian Bay Tree Hill”) and Morne Mazeau, with unique panoramas of the coast, Caribbean Sea, and, in the distance, Montserrat Island and its 915-meter volcano. This is the starting point for trails leading to Barre de l’île, Sofaïa, Solitude, and Dos d’Ane, among others. On the ocean side, visit small, untouched Paul Thomas beach, a haven of tranquility. After that, visit Ferry, known for the skill of its seine-net fishermen and boat builders. The hamlet of Ferry features Leroux Beach, at the foot of Ferry Point; a former battery; and a footpath, in addition to a well-equipped water sports center. Lovely Petite Anse Beach marks the boundary between the communes of Deshaies and Pointe-Noire. Chemin Bleu tourist maps of Guadeloupe and city street maps are available at the Office of Tourism. www.villededeshaies.fr. 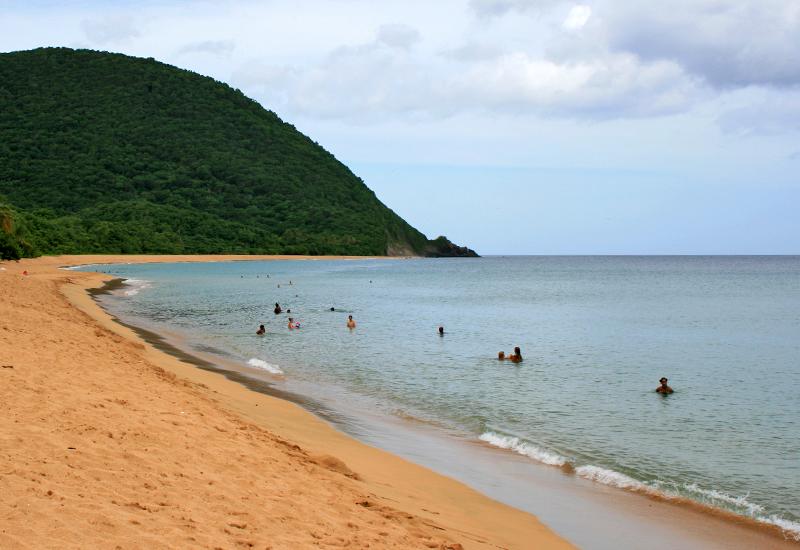 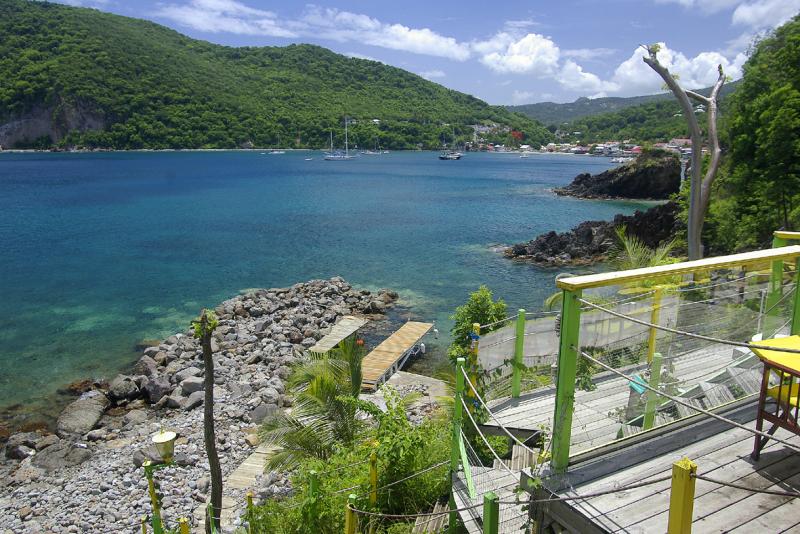 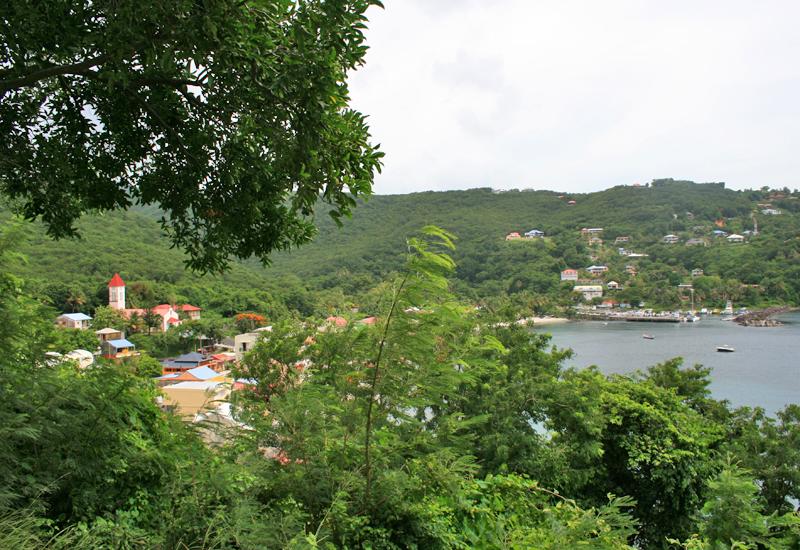