The fate of Petit-Bourg has long been determined by its proximity to Pointe-à-Pitre, which has at times contributed to its prosperity, and at other times overshadowed it. Located near the juncture between Basse Terre and Grande Terre islands, Petit-Bourg nearly became the colonial capital. Up until the last century, the road from Basse-Terre ended at Petit-Bourg and stagecoach passengers traveling from that seat of government were obliged to stop here to board the boat for Pointe-à-Pitre. The port served Petit-Bourg a means of economic development some savvy businessmen built a fortune on.
This lush commune was named in opposition to the "Grand Bourg, ” Basse-Terre, fortified city and government headquarters that was long the happy rival of this Parish of "Notre-Dame du Petit Cul-de-Sac,” as the tiny village was called by ecclesiastical authorities in the 16th century. This small community developed through farming and its small, protected harbor, which, by the 18th century, was already one of the most active in the colony. This is because, although its reefs prohibit pleasure cruising in this part of the bay, they are a boon for fishing, acting as natural fish tanks for rockfish and crayfish.
A large parish, Petit-Bourg was the site of the colonial assembly of 1787, at which three deputies were elected to represent Guadeloupe for the first time at France’s National Constituent Assembly.
However, the development of Basse-Terre and Pointe-à-Pitre, whose importance as a port only continued to grow, tended to relegate the village to the sidelines.
Yet Petit-Bourg has contributed its moments of drama and glory to the history of the area:  the battle of Bacchus Point, fought in 1794 during the island’s British occupation—in which 300 Englishmen and slaveholding planters were killed by Victor Hugues’ troops, commanded by Pelardy; a series of slave revolts and brutal repressions; and the witch trial and burning of Gertrude, a negro slave. These are just a few of the incidents illustrating the suffering and bravery of the people who have lived here.
Prior to 1850, society was organized around approximately twenty sugar factories (La Lézarde, Duquerry). Several others were built in the early 20th century (Ruillier and Co., Saint-Jean, Tabanon). They succumbed to the collapse of the sugar industry affecting all of Guadeloupe, the last operating refinery being the Roujol plant, which closed in 1962.
A few traditional, well-preserved houses can still be admired in the village center, which is now undergoing total renovation and has remained extremely active. The area around the Place de la Mairie is lively and bustling, as are the nearby shopping streets. Just across the way, in the port area known as “la Vinaigrerie,” fisherman set up at dawn to sell magnificent catches from their lockers. Plans are underway to develop a multi-use port with modern facilities.
Panoramic views of the bay of “Petit Cul-de-Sac” can be had from the Bovis neighborhood overlooking the inlet, or along the shoreline at Place Sarrault, which is currently undergoing major renovations. From here Petit-Bourg provides directs access to nearby mangrove swamps and coral reefs. A number of ravishing little islets dot the bay:  Cabrit, Frégate de Haut, Grand Islet, and Petrelluzzi.
Other special features that add to the vitality of daily life in Petit-Bourg include Bellevue and its commercial center, the Saint-Jean neighborhood, and the Bacchus Point neighborhood, home to the general and technical secondary school, “Les Droits de l'Homme“ (“Human Rights”), along with the Laura Flessel sports complex, named for the famous 5-time Olympic medalist and 6-time world champion fencer.
Petit-Bourg has a lot going on. The local population gathers for traditional events such as the home flower competition in June, the Chaubette (small shrimp) and mollusk festivals in July, the traditional “Lautou Tibou” walking race in August, the annual patron saint’s festival of “Notre-Dame du bon port” on August 15, and the “Nwèl Tibou” traditional song festival in December. The “Jaden péyi Ti-Bou” farmer’s market takes place every Friday on the parking lot near the Montebello traffic circle.
The area boasts many active and enthusiastic athletic clubs, and the city has built a number of high-caliber sports facilities to accommodate them, for example the recent Gaël Monfils tennis complex in Colin, the rowing center, and the new swimming pool. The people of Petit-Bourg have been soccer enthusiasts for decades, with clubs such as Mondial, Éclair, Évolucas and Arsenal. Arsenal supported the emergence of the famous soccer player Robert Jacques, whose talent has inspired an entire generation of athletes. Many other team sports (volleyball, basketball, etc.) are played on the commune’s many sports fields. Local cyclists also enjoyed their hour of glory in the days of Alceste Farescour, Émile and Robert Bolus, Roland Devaux, Romain Gueppois and Frantz Volga.

Located 15 km from Pointe-à-Pitre, the commune of Petit-Bourg, population 23,200, extends from the bay of Petit Cul-de-Sac Marin, along a coastal band of mangrove swamps, coves, and beaches, to the mountainous heights and Route de la Traversée road. Guadeloupe’s largest commune, it covers an area of 13,000 hectares and features numerous streams and rivers:  to the North, the Coin River separates Petit-Bourg from Baie-Mahault; to the south, the Sarcelles River forms the commune’s boundary with Goyave. The spectacular La Lézarde and La Moustique rivers also run through it. Numerous ravines grace this pleasing landscape, including “Onze heures” (“Eleven Hours”), which passes through the town of Petit-Bourg beneath the famous “Pont onzé” bridge, “Camargo,” “Justin,” “Couleuvre” (“Grass Snake”), and “Deuxbras” (“Two Arms”).
Petit-Bourg has always been a major agricultural commune. In the past, coffee, cotton, tobacco, and cacao were produced here. Today the commune is known for its yam and pineapple plantations, which produce the famous “bouteille,” or “bottle-shaped,” pineapple. Bananas, sugar cane, and subsistence crops are also grown here. The commune welcomes the work of the INRA (French National Institute for Agricultural Research), which actively contributes to the development of farming and cattle-raising in Guadeloupe.
The final representative of the island’s traditional rum factories, Montebello Distillery, continues to produce rum of exceptional quality recognized throughout the world.
Ideally situated with numerous residential areas, Petit-Bourg has seen a rapid rise in population in recent years. Nicknamed “La Ville qui Bouge“ (“City on the Move”), it offers modern infrastructure and many facilities. In addition to an artisanal network distributed throughout the region, the commune is home to a number of economic activities. Following in the footsteps of the Roujol and Arnouville business areas, the La Lézarde business park in Colin is currently seeing a boost in activity. Petit-Bourg’s vast and varied landscape, and careful preservation of natural beaches and tropical flora, has also made it an attractive tourist destination.
In the heart of the National Park, visitors enjoy a unique tropical setting, where exotic birds reign alongside the famous Guadeloupe raccoon, a subspecies of the common raccoon that is the official mascot of Guadeloupe (protected by ministerial order since February 17, 1989). From the Maison de la Forêt, on the beautiful Route de la Traversée road that leads to “Deux Mamelles,” numerous trails alongside bubbling streams lead to waterfalls and various other sites maintained by the Office National des Forêts (O.N.F., the National Forest Office).
In addition to its dense vegetation—a highly prized, but fragile resource—Petit-Bourg boasts more than 40 hectares of coastal lands and forests maintained by the Mayor’s Office for the management and development of this unique site.
The exceptionally beautiful Viard volcanic sand beach, bordered by coconut trees, “raisiniers” (“grape plants”), and almond groves, is a pleasant setting for water recreation, with activities available through the sailing center. Each year the beach hosts the internationally known Karujet World Jet Skiing Championship. Since 2008, this competition has been included on the UIM-SPES World Championship schedule. The four-day event attracts over 40,000 visitors.

Across this vast landscape of rolling hills, lush valleys, and navigable waterways, with numerous sites for touring and recreation and many vacation rentals, the Office of Tourism is working hard to promote green tourism, in coordination with municipal efforts to stimulate economic activity and host events in keeping with sustainable development. - www.ville-petitbourg.fr. Chemin Bleu tourist maps of Guadeloupe and city street maps are available at the Office of Tourism. 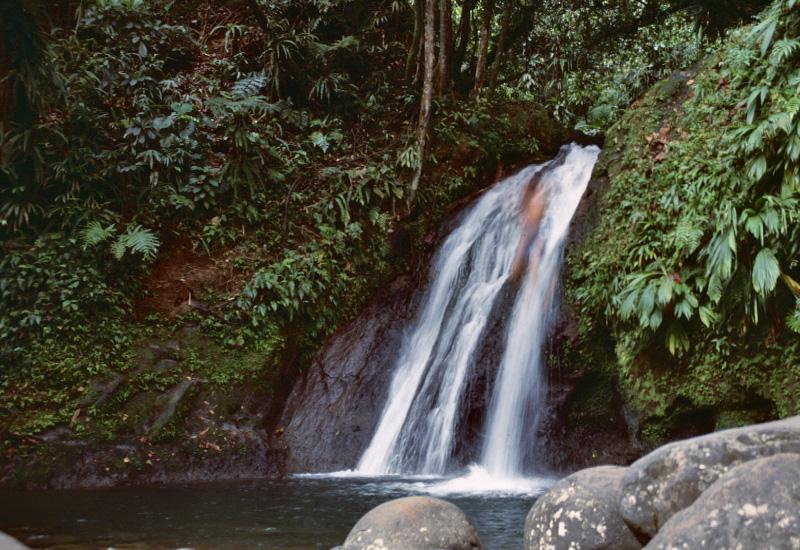 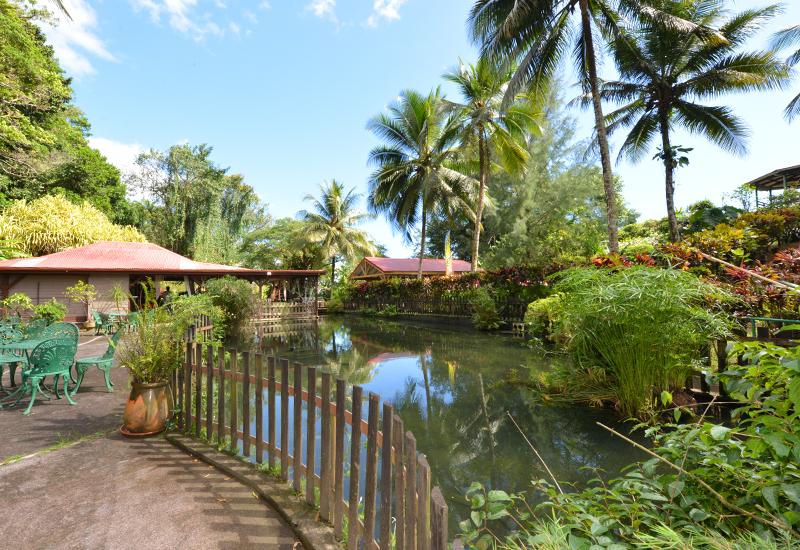 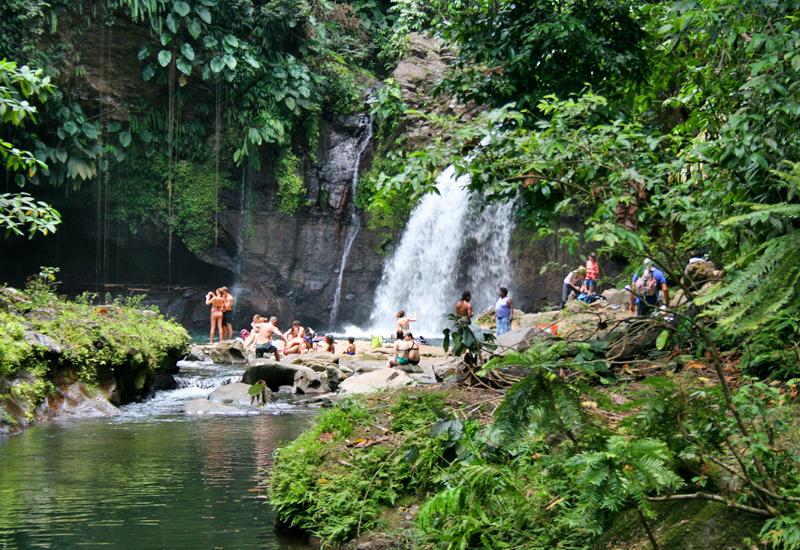 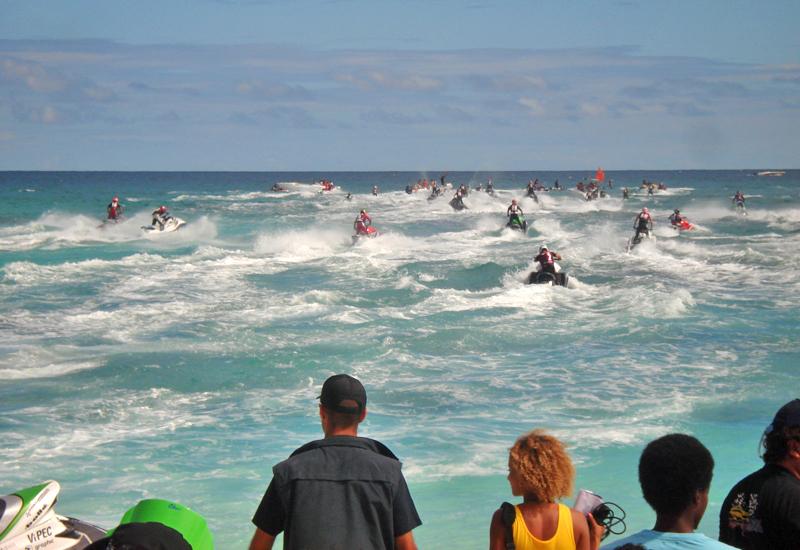