Goyave:  Land of Color and Flavor

The commune of Goyave, which covers an area of about 5,830 hectares, has a long Atlantic shoreline and is dominated to the west by Mount Matéliane (1,298 meters), from whose heights descend the Moreau and Bras du Fort waterfalls to form the “Petite rivière à Goyaves” and “La Rose” rivers. To the north, it is separated from the commune of Petit-Bourg by the Sarcelle River; to the south, it is divided from the commune of Capesterre-Belle-Eau by the Briqueterie Ravine.
Originally occupied by Amerindians who were forced to seek refuge on nearby islets when the colonists arrived, this land of rolling hills, bayous, and abundant streams has always been attractive to farmers. Its arable land was occupied from the earliest days of colonization in the late 17th century. The parish of “Sainte-Anne de la Petite Rivière aux Goyaves” (“Saint Anne of the Little Guava River”)—named for the many guava trees on the banks of the commune’s largest river—was officially founded here in 1684, named for the patron saint Anne, after Anne of Austria, the queen consort of France. The Goyave city emblem depicts yellow guava trees, a river—recognizing the value of water as a natural resource—and a banana tree, the basis of the local economy.
Sugar cane plantations were quickly established, in addition to ginger, tobacco, coffee, and cacao growing concerns. By the end of the 18th century, ten sugar plantations were operating in the commune, including the very first, the Rousseau Plantation, whose owner, Pierre Quentin Rousseau, became mayor of Goyave in 1792. Other plantations also flourished here, in particular the commune’s largest, Sainte-Claire (600 hectares, including woodlands); "Aiguille” (“Needle”); and the Fort'Ile plantation-distillery, one of the most prestigious in Guadeloupe, whose doors remained open until the 1970s. The sugar industry, however, was significantly impacted by a number of social and political events during the French Revolution, and the sequestration of the plantations, which were declared state property, resulted in an exodus of the planters.
In 1802, the town of Goyave and its church were burned down during a revolt against the reinstitution of slavery. Unable to function, Goyave was placed under the political and religious governance of Petit-Bourg. This lasted until 1827, when the Baron des Rotours signed the act of separation. The sugar industry made a tepid recovery, before being gradually replaced by the banana and fishing industries.
The commune was able to maintain its agricultural base throughout the 19th century, even in the face of some major natural disasters affecting Guadeloupe as a whole; in particular, the hurricanes of 1825 and 1865, and the earthquake of 1843. The shoreline areas were the first to develop, with several towns springing up along the departmental road—formerly the colonial road—where riveted metal bridges such as Rivière La Rose Bridge, and Sainte Claire Bridge over the Petite Rivière à Goyave river, were constructed according to the same method as the Eiffel Tower to span the commune’s two major rivers.
Jean-Baptiste Jammes, grandfather of poet and novelist Francis Jammes, served as mayor of Goyave from 1847 to 1856. Born in Orhez, he practiced medicine in Guadeloupe and is now buried at the Champ-d'Asile plantation in Goyave. Over the course of the 20th century, the fishing and aquaculture industries emerged and developed alongside agriculture. Land was cultivated on the crests of the ridges, tops of the hills, and sometimes the sides of the slopes, primarily with banana trees, in places such as Morne à Gomme hill, the heights of Forte-Île, l'Ermitage, Morne Rouge, Dame Jeanne Cassée, etc. Although sugar cane is still grown—in Fredy, for example—agriculture has diversified to include garden vegetables and fruits (orchards, pineapple plantations), particularly in Sarcelle and the Moreau River valley.
Due to its favorable location on the route between Basse-Terre and Pointe-à-Pitre, the commune has experienced a growth in population over the past ten years. Several housing initiatives have been launched to accommodate the commune’s 8,065 residents, including one in the Aiguille “ZAC” zone (area earmarked for government planning). The commune has also built up its secondary sector with the establishment of small industries and the creation of artisanal areas and business parks (Forte-Ile and La Rose) along the national highway. Serious efforts have also been made to boost activity along the coast, with the creation of the Centre Nautique (Sailing Center) in affiliation with the Fédération Française de Voile (French Sailing Federation), whose mission is to train young people in marine occupations. As part of this initiative, the city lent support to a project that involved young people in the construction of a traditional “canot” dinghy, christened “La Ville de Goyave.” The fishing port is also an important economic driver, not only due to fish sales, but also as a point of departure for mangrove tours, and a setting for the craft and farmer’s market. A member of the territorial charter of the National Park of Guadeloupe with significant natural resources—mangrove swamps, gardens, tropical vegetation, waterfalls—the commune is now firmly on the path to developing ecotourism.

Prized destination for nature lovers, this commune and its varied landscape is best discovered by following your whims, getting off the beaten path, and being open to discovering what lies around the bend.
From Petit-Bourg, National Highway 1 (RN1) plunges directly into the heart of the commune. On the land side of the highway, the heights of Mount Matéliane can be seen in the distance towering above narrow wooded valleys. The commune has a strong rural identity. A large proportion of its land is covered by long bands of forest descending almost to the sea. The “Petite Rivière à Goyaves” is fed by two major tributaries, Rivière Moreau and Rivière Bonfils, which drain most of Mount Matéliane’s eastern watershed. Downstream, the Petite Rivière à Goyaves valley is characterized by a coastal plain with many large banana plantations marking its flat terrain, a vivid reminder of Goyave’s agricultural identity.
From Blonzac, take highway D33 to visit the Jardin d'eau (“Aquatic Garden”) on the La Rose River. Designated as an ecotourism site by the National Park of Guadeloupe, it provides information about the flora of Guadeloupe in a unique natural setting. Return to highway N1 to the right in the direction of Douville over a shady forest road of volcanic tuff. After entering the Douville forest, with its steep hills, tree ferns, and other plants of interest, you will arrive at a parking lot, with a trailhead leading to the Moreau waterfalls. This unforgettable site is among the most breathtaking in Guadeloupe. Please note:  allow six hours round trip. Trails are available to other sites, including Bras-du-fort.
Across the national highway on the ocean side, the terrain is characterized by wetlands and a long band of mangrove swamps that grow thicker near the mouths of the two rivers (Rivière La Rose and Petite Rivière à Goyaves). Historically, the shoreline areas were the first to develop, with several towns springing up along the departmental road—formerly the colonial road. Riveted metal bridges such as Rivière La Rose Bridge, and Sainte Claire Bridge over the Petite Rivière à Goyaves river, were constructed in the late 19th century according to the same method as the Eiffel Tower to span the commune’s two major rivers.
Isolated from the national highway (RN 1), which was rerouted in the 1980s to go around it, a small village with a port may be discovered that has retained all of its historical charm. Fishermen can be seen repairing their nets and lockers. From the port, it is possible to reach La Rose Point, where the river of the same name empties into the sea, to tour the mangrove swamps. Mangrove forests grow in salt marshes in an extraordinary ecosystem where these red halophytes provide habitat for many birds. This is also a jumping-off point for a day on Fortune islet, the “land that time forgot.” Stroll around the village and meet the captivating local population. Breathe in the bracing sea air of this peaceful refuge while visiting the oldest building still standing:  the former prison, constructed in 1847, which was little used and is now completely vacant. Take in humble fisherman dwellings, small boutiques, and the comings and goings of the islet’s residents, far from the noise and traffic of the national highway.
Past the town, cross the Petite Rivière à Goyaves to visit the Morne Rouge neighborhood, which offers direct access to l'Anse à sable and beautiful Sainte-Claire beach. Take a fascinating tour of the “Verger au mille fruits” (“Orchard of a Thousand Fruits”). Return to N1 in the hamlet of Christophe. The verdant hills of Forêt Georges and Forêt de Fredy signal the start of a climb to the heights of neighboring town Capesterre Belle-Eau. Chemin Bleu tourist maps of Guadeloupe and city street maps are available at the Office of Tourism. 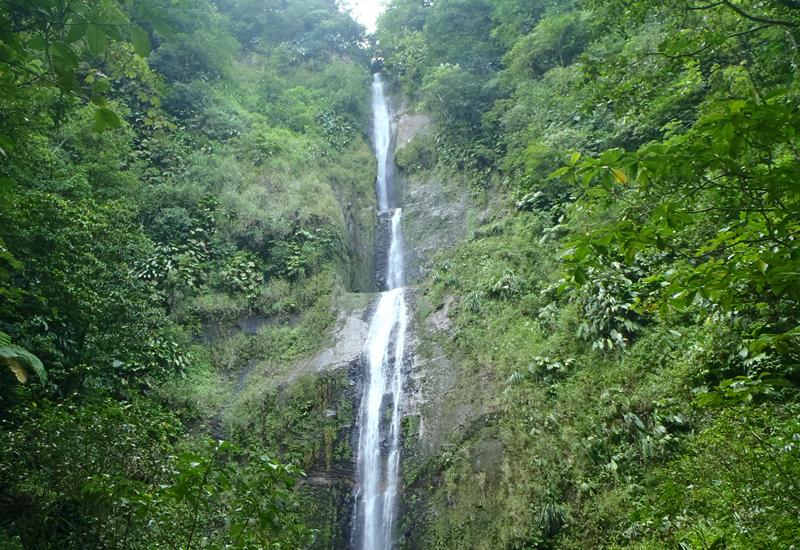 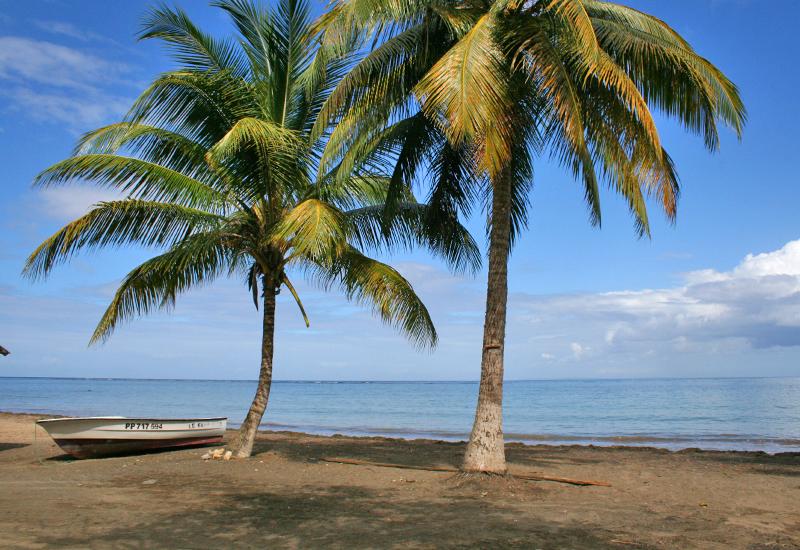 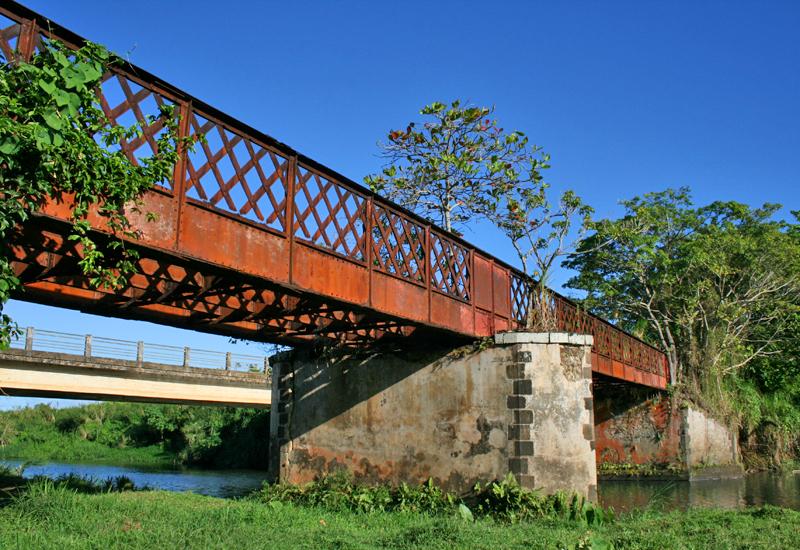 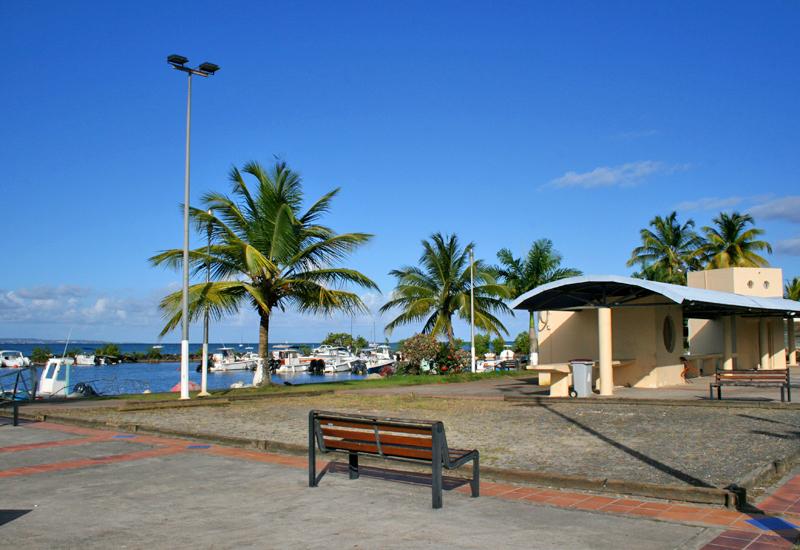