La Désirade was the first island of the arc of the Antilles to emerge from sea. This massive coral reef lies atop a submerged foundation of volcanic rock, exposing material from the Lesser Antilles’ oldest geological phase. The eastern part of the island is home to a 62-hectare nature preserve (designated by national decree in July 2011). There is archaeological evidence throughout the island of its inhabitation by Amerindians, who referred to it as Oüaliri, from the 3rd to the 16th centuries C.E.
In addition to its fascinating geological heritage, La Désirade offers a number of rare species of flora and fauna—including the striking “Tête a l’anglais” (locally, ““Tèt a langlé“) cactus—to pique visitors’ interest.
Europeans first arrived on La Désirade in the late 15th century (about 1493). The island owes its name to the immense relief felt by the sailors of the Spanish fleet as they came upon the first dry land they had encountered since leaving the Canary Islands. However, after finding no fresh water on this 22-km² rock, they continued on to the main islands of Guadeloupe.
After more than a century of Spanish rule, the island fell into the hands of the French. Although the archipelago began being developed in 1635 by the Compagnie des Îles d’Amérique (“Company of the American Islands”)—backed first by Richelieu, then owned by Governor of Guadeloupe Charles Houël—arid La Désirade was left alone. In 1649, it became the property of Lord Jean de Boisseret d’Herblay, brother-in-law of Charles Houël.
It was not until 1674 that La Désirade officially became a dependency of Guadeloupe. However, the archives show no trace of settlement prior to 1724. Devoid of agricultural potential, the island was at first no more than a hideout for pirates. However, little by little, European colonists—primarily from Brittany (mainland France)—found ways to take advantage of its isolation, developing a fishing industry, then growing cotton and indigo (late 17th century) and raising cattle.
Despite these early efforts at developing its economic potential, La Désirade was still considered a place of seclusion. In 1728, a leper colony was established here, whose ruins can still be seen in the Baie-Mahault district. In addition to being used as a sanatorium, the island became, by royal order of July 5, 1763, the destination of numerous deportees from mainland France, primarily “youths engaging in disreputable behaviors that risk undermining the honor and tranquility of their families.” The parish of Notre-Dame du Bon-Secours was established in 1754. In 1763, a prison was built in the hamlet of Les Galets, closing four years later when the deportations ceased. In 1779, the island registered a population of 1,100, including landowners, small tradesmen, and slaves, who worked the island’s sixty plantations, growing cotton and food crops. The French Revolution, followed by the abolition of slavery in 1848, marked the beginning of the end for these operations, triggering the departure of many of landowners. The cholera epidemic of 1865, during which nearly 17% of the population perished, was the impetus for the creation of Les Galets Cemetery.
The island suffered its share of losses in World War I. In 1920, a cotton company opened in Baie-Mahault, ceasing operations eight years later in 1928.
The second half of the 20th century was a time of increasing development for the island, spurred by the modernization of inter-island transport with the introduction of steamboats, followed by air transport in 1950. The island received electricity in 1960. At that time, a marina was built to accommodate passenger boats, medium-sized fishing boats, and recreational craft, paving the way, in 1991, for shipments of fresh water from Saint-François.
To overcome its insularity—in every sense of the term—La Désirade is leveraging the homegrown values of its 1,646 close-knit, hospitable residents, who, while working passionately to preserve the island’s traditional activities—including fishing, still the primary economic resource, and cattle-raising—have embraced a policy of sustainability, and are welcoming the development of ecotourism. In support of this, La Désirade is preserving its beaches, maintaining its hiking trails, building restaurants and guesthouses, introducing apiaries, reviving indigo farms, and developing artisanal activities. A number of festive events showcase the island’s warmth and hospitality, including the “Fèt a Kabrit” (“Goat Festival”), which takes place over Easter weekend. This festival was launched in 2002 by the local municipality as an opportunity to promote the island’s goat-based products and culinary specialties, in a relaxed atmosphere of games, presentations, and discussions. Another major event is the “Fête des Marins” (“Sailors’ Festival”) in August, at which a statue of the Virgin Mary and the model of a three-mast ship, “The Veteran,” are carried by fishermen in a long procession to the port, where the boats and waves are blessed. The island’s peaceful atmosphere and welcoming residents are two of its most prized and precious assets.

Visitors arriving by sea (from Saint-François), or by air (from Pôle Caraïbes airport or Saint-François airfield) are immediately struck by the magnitude of this arid, wind-battered, 11 km x 2 km rock with its jagged coastline, so different from the other islands of the archipelago. Grande Montagne (“Great Mountain”), rising 275 meters, is its highest point.
The southern, windward coast slopes gently toward the sea. This is where the bulk of the island’s approximately 1,700 residents live. The main road (D207) takes visitors past a series of headlands and coves, from Anse des Galets to Grand Abaque Point, all the way out to Pointe Doublé. This part of the island features white-sand beaches and crystalline waters protected by a coral range. On the opposite side of the island, the northern, leeward coast remains unpopulated and untouched, with sheer, dramatic cliffs plunging into the sea, marine bird reserves, and small, hidden coves. La Désirade, like the unpopulated Petite-Terre islands that belong to it, features amazingly diverse vegetation and a magnificent underwater environment populated by stunning marine life, including barracudas, sharks, rays, tortoises, coral, sponges, and all sorts of colorful tropical fish.
Stepping off the boat, visitors are immediately enveloped by the friendly atmosphere of the tiny port of Beauséjour, where boats rock gently in the breeze as fishermen go about their work. Stroll past the town’s pretty wooden buildings to shady Place du Maire Mendiant (“Begging Mayor Square”), home to the town hall, Notre-Dame du Bon Secours church (18th – 20th century), the monument to Victor Schœlcher, and a monument to lost sailors. Continue 200 meters toward Les Galets cove to the poetic sailors’ cemetery, with graves marked by conch shells. Higher up, the chapel of Notre-Dame du Calvaire, built in 1905, commands a panoramic view of the island and the sea. This chapel marks the final stage of the Way of the Cross.
Next, visit superb Fifi Beach with its coconut palm grove, the jumping-off point for exploring the rest of the island (4x4 highly recommended for climbing to the top of the mountain). Stop by Le Souffleur, a fishing village with a magnificent, yellow-sand beach. Continue on departmental highway D207 to the “Sentier des Eoliennes” (“Wind Farm Trail”) and Grande Rivière (“Big River”) Trail. Next, visit the Baie-Mahault district. The road goes past the chapel of St. John the Baptist, also known as Notre Dame du Phare (“Our Lady of the Lighthouse”), featuring a beautiful ocean lookout. Anse de Petite Rivière (“Little River Cove”) features a pleasant coconut-palm beach protected by a coral reef, a great spot for scuba diving. The road continues to the hamlet of Baie-Mahault, where the ruins of the chapel of the former leper colony (18th century) may still be seen. Continue on D207 past a traditional sailors’ cemetery, the ruins of a former cotton mill, and a lighthouse, to Pointe Doublé and its wind-battered weather station, now shuttered. From here, enjoy the dramatic spectacle of crashing surf. You are now in the heart of a remarkable geological reserve. Visitors have the option of continuing all the way to Pointe du Grand Abaque. Admire the immensity of the ocean from atop steep cliffs. As you rise above Baie-Mahault on the mountain road, the vegetation grows denser. Many cactuses grow here, along with protected species such as wild orchids. The rough mountain road continues all the way to the top. To the east:  the wind farm and spectacular views. A 10-km trail crosses the island’s central plateau, offering magnificent panoramas from the heart of the island’s wilderness. Visitors will encounter unusual vegetation—including guaiac wood trees, cashew trees, mapou (kapok) trees, cactuses draped with iguanas and, with a little luck, agoutis (yellow-banded rabbits)—in a setting that is also home to a multitude of marine birds (including frigate birds and pelicans). At Morne Souffleur (“Blower Hill”), enjoy the impressive sight of the wind turbines. Next, arrive at the chapel of Notre-Dame du Calvaire (breathtaking views of Petit Nord Point) where you will find the beginning of the Latanier Trail (point of departure for the Grand Nord Trail) leading to the hamlet of Les Galets, a cattle-raising area. To the far west stands a stela, offering a beautiful panorama looking toward Pointe des Châteaux (“Castle Point”). Iguanas are often seen here. Enjoy a pleasant walk to Pointe des Colibris (“Hummingbird Point”) with its cross, a platform for enjoying spectacular sunsets. When night falls, the villagers take advantage of the cooler evening air. - www.iledesirade.fr. Chemin Bleu tourist maps of Guadeloupe and city street maps are available at the Office of Tourism (Office Municipal de Tourisme de La Désirade, La Capitainerie) - Tel.:  0590 84 61 39 - Port.: 0690 64 14 54 – Hours:  Monday, Tuesday, Thursday, and Friday, 8:00 a.m. – 12:00 p.m. / 2:00 p.m. – 5:00 p.m.; Wednesday, Saturday, and holidays, 8:00 a.m. – 12:00 p.m. 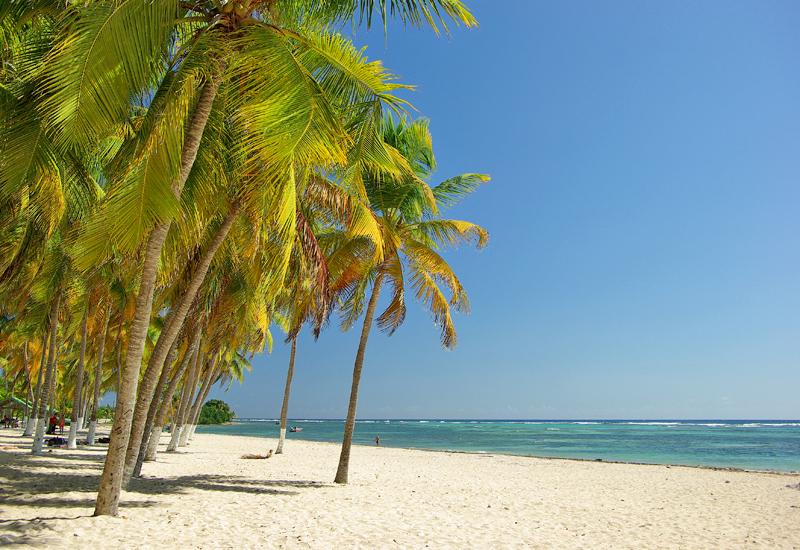 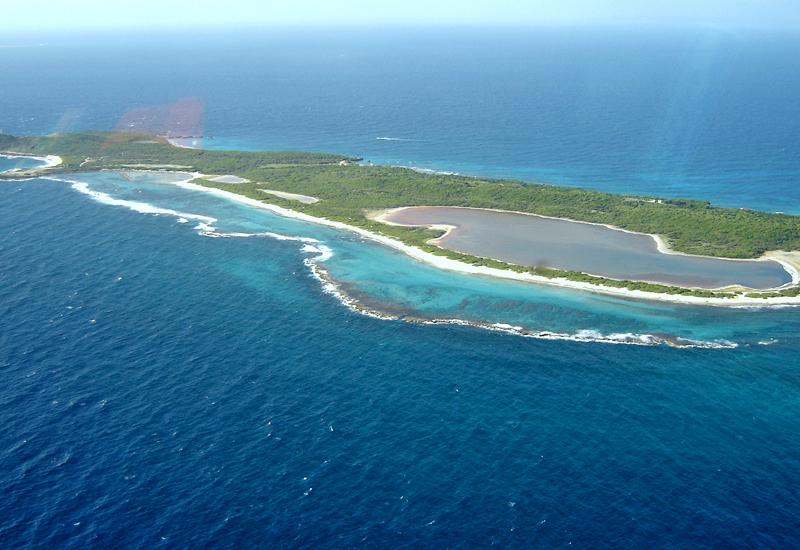 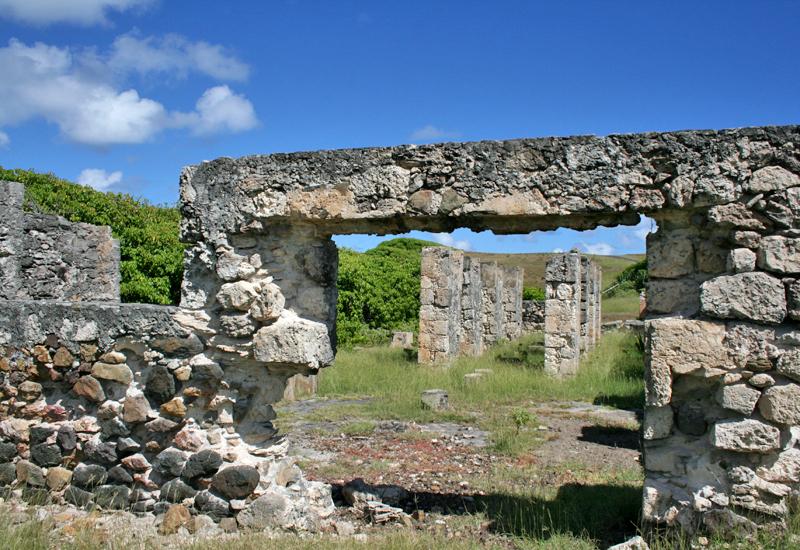 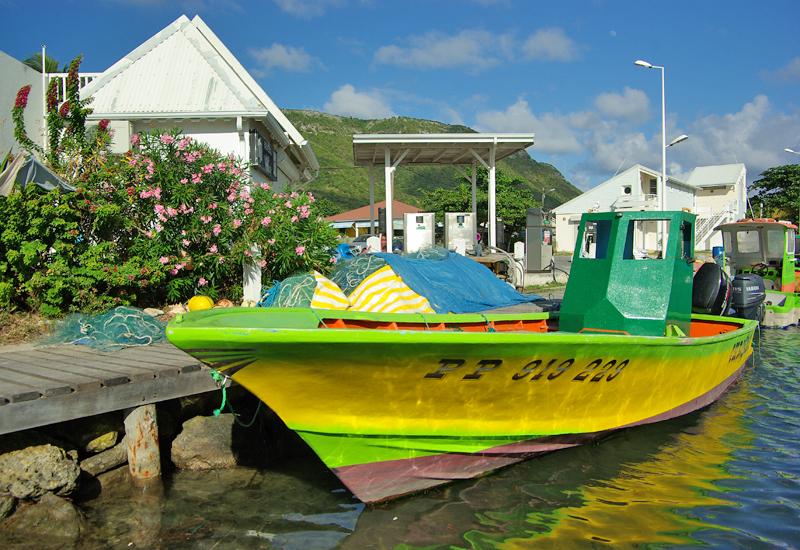